Hot on the trail of a cure

Chemotherapy, radiation, and surgery, the three main established therapies, aren’t always successful at completely eradicating the disease and often leave collateral damage. In the effort to destroy or remove cancer cells, surrounding healthy tissues can be harmed in the process.

But scientists, including Zoe Boekelheide, assistant professor of physics, are making promising headway on an alternative breakthrough therapy that uses nanotechnology to make targeting cancer cells more of an exact science. 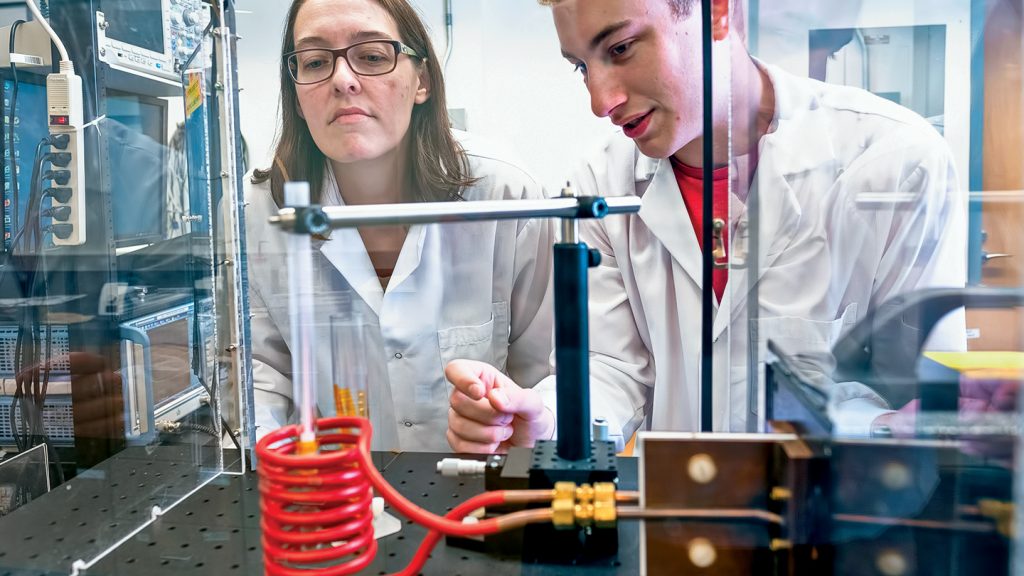 Physics major Jackson Miller ’19 has worked in Boekelheide’s group for the past year and a half. In 2017, he had the opportunity to present research at the Magnetism and Magnetic Materials conference on a project focused on a specific type of nanoparticle called bionized nanoferrite (BNF). BNF has been shown to have a large heating response, which means it could be promising for use as a magnetic hyperthermia cancer treatment. He is working on an honors thesis in which he is improving one of the magnetic measurements in the lab that can help characterize particles for hyperthermia.

In the global war against cancer, all eyes are on nanoparticles—microscopic molecules possessing special properties that stand to revolutionize how the disease is treated. These miniscule materials with diameters about 10,000 times smaller than that of a human hair can’t be seen with the naked eye. But don’t judge them by their size: They are tiny but mighty. Nanoparticles have the capability to destroy a cancer cell from the inside out—while leaving healthy cells unscathed, Boekelheide says.

There are several ways nanoparticles can be used as anti-cancer weapons. They can spur the body’s own immune system to fight tumors. They can deliver medicine directly to an affected cell (so that healthy cells aren’t subjected to chemotherapy). And they also can deliver a lethal dose of heat to a cancer cell.

This third method—what’s known as magnetic nanoparticle hyperthermia (essentially, the “cooking” of cancer cells)—is at the heart of Boekelheide’s research.

The Heat Is On

Hyperthermia, the idea of heating tissue to kill off disease or infection, is not a new concept or therapy. Its history traces back to ancient Greeks and Romans. Localized, regional, or whole-body hyperthermia is sometimes used in mainstream medicine in conjunction with radiation and chemotherapy.

The complicating factor is that cancer cells must be heated to about 109 degrees F to be destroyed, and side effects to the human body at such a temperature range from unpleasant to serious (vomiting, burns, blistering, nerve damage). For hyperthermia to be effective and without consequence, doctors need to be able to target only the specific cells they want to kill. That’s where nanoparticles—specifically heat-generating magnetic nanoparticles—enter the picture.

“You can inject magnetic nanoparticles into a tumor and then subject the tumor to an alternating magnetic field,” Boekelheide explains. “The field goes back and forth very quickly, causing the magnetic properties of the nanoparticles to release heat at a temperature that will destroy cancer cells. It’s a noninvasive way to kill a tumor. But it’s still a developmental technique.”

Indeed, while magnetic nanoparticle hyperthermia is available as a cancer treatment in Germany and is in clinical trials in the United States, it’s not yet a perfected procedure. More research is needed to answer key questions: Which nanoparticles are the best to use? What’s the appropriate dose of those nanoparticles? What’s the right temperature to ensure all cancer cells—including those at the outer rim of the tumor—are eradicated? 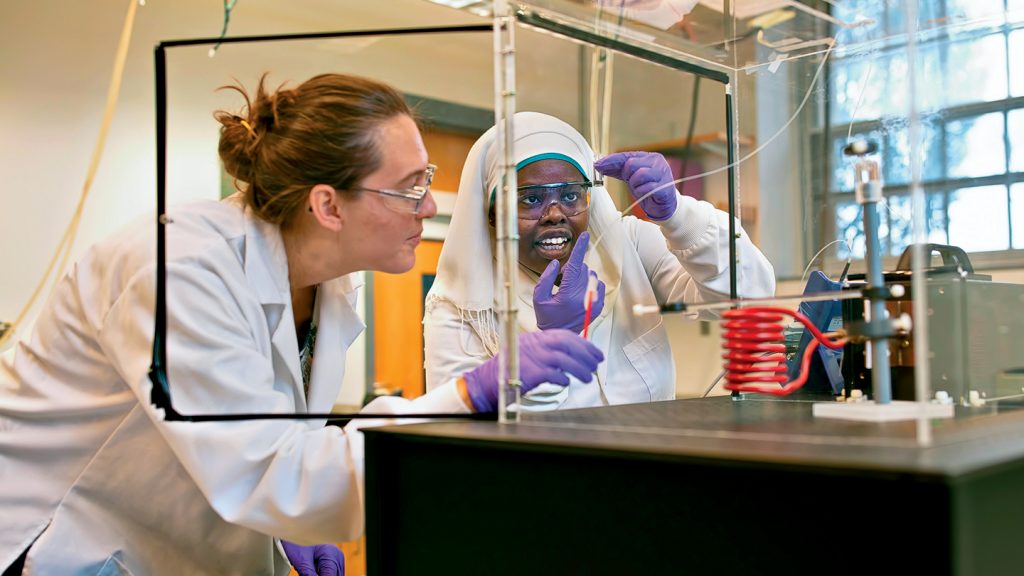 Thanks to the experience she had in Boekelheide’s lab, Zainab Hussein ’17 plans to attend graduate school in 2019 to continue research in the biomedical field.

Attempting to answer—or at least shed more light on—those questions has kept Boekelheide and student research assistants in her physics lab quite busy. Boekelheide has published several papers on the topic of magnetic hyperthermia since joining the faculty of Lafayette in 2013. Her latest, which she co-authored with Zainab Hussein ’17, appeared in the journal IEEE Transactions in Magnetics. In it, they report on the promising potential of a specific nanoparticle called gadolinium 5 silicon 4.

What’s so special about that nanoparticle? Its ability to self-regulate its heat production, Boekelheide says. It will get just hot enough to kill a cancer cell and then shut itself off before it can harm surrounding noncancerous tissues.

“Cancer cells are a little more heat-sensitive than healthy cells,” Boekelheide says. “You can heat the cells to a temperature that will kill the cancer cells, and the healthy cells around them are a bit more robust and will be able to withstand the heat. But if the nanoparticle would keep heating, it could cause damage to other cells. What we found with gadolinium 5 silicon 4 is that it has a ‘transition period’ [when it stops producing heat] that is close to the treatment temperature for cancer cells.”

I found Professor Boekelheide’s research really interesting. But a big part of why I stayed with her is that she has been such a great mentor to me. She gave me opportunities to think creatively and grow.
–Zainab Hussein ’17

It was a significant finding—and quite a way for Hussein to culminate her college career and apprenticeship with Boekelheide.

Hussein, who graduated with an electrical and computer engineering degree, began working with Boekelheide the summer between her first and sophomore years. The Kenya native says she knew assisting Boekelheide would be a valuable experience, but she had no idea just how extensive it would turn out to be. Thanks to support from the Bolton Fund, Hussein was able to remain Boekelheide’s research assistant for the duration of her collegiate career, which gave her the opportunity to co-author two papers and present the research at two national conferences.

“I don’t think a lot of undergraduate students get to do the type of work that I did or co-author papers or present the research,” says Hussein. “I found Professor Boekelheide’s research really interesting. But a big part of why I stayed with her is that she has been such a great mentor to me. She would say, ‘This is the general idea I have, but what do you think? How would you do it?’ I really loved that. She gave me opportunities to think creatively and grow.”

Creative thinking may not be what you’d expect in physics lab, where each step of a scientific procedure is highly controlled and precisely measured. But looking at a problem from different angles and exploring the unknown to find new solutions is what enables Boekelheide to make progress and contribute to what’s considered one of the hottest fields of medical research.

The next puzzle piece Boekelheide is after is to measure the magnetism, not just heating power, of nanoparticles. She recently acquired a new instrument, pick-up coils, which will enable her to do just that in her lab.

“Every piece of information we gain will provide more details and help us better understand just how we can effectively use magnetic nanoparticles to treat cancer,” Boekelheide says. “It feels really good to be doing this and contributing to this research.”