Learn how the leopard leaped onto campus and into local lore

The leopard that lived on campus in 1943

Leopard-spotted accessories, snarling leopards on maroon sweatshirts, and the strutting, flag-waving mascot at football games are as much a campus tradition as the ubiquitous imagery of the Marquis de Lafayette. 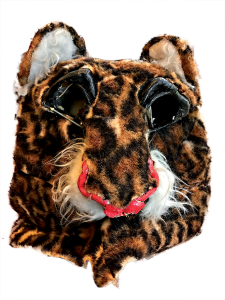 A leopard mascot head from 1985

It would seem that the freckled feline has been on the prowl since the College’s earliest days, pouncing into history from some mythical lair at Pardee Hall.

But the leopard’s entry at Lafayette College came with more of a muted purr than a ferocious roar.

Diane Windham Shaw, director of special collections and college archives, recently pulled out the leopard file, including vintage leopard costume heads in various stages of decay, from the deep recesses of the archives. 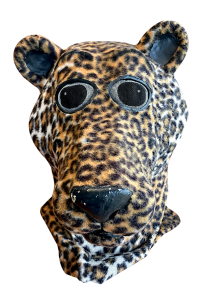 A leopard mascot head from 1988

The first published mention of the leopard as Lafayette’s mascot was Oct. 7, 1927, in a brief sports story in the student newspaper. Without any background or context behind the decision, it simply stated that the leopard was to be official mascot of the football team.

“This was decided last night at the regular meeting of the student council held in Brainerd Hall,” the article reported. “A leopard skin has been ordered and will be worn by a student at the remaining games this season. Last year such a skin was worn at the Penn and [Washington & Jefferson College] games, and was met with approval.”

George Parkman ’28, who served as sports editor of The Lafayette when the story ran, later recalled that a number of Lafayette’s football opponents had animal nicknames, “and someone decided Lafayette should also have one.” Shaw theorizes that the leopard was adopted for its alliterative property.

Before the leopard was canonized, Lafayette teams had simply been referred to as “The Maroon,” a reference to the school colors, maroon and white. Like the leopard mascot, the color scheme came about without much fanfare. It was chosen by the Rev. William Cassady Cattell, seventh president of Lafayette College, for an intercollegiate oratorical contest in 1875.

A leopard came to campus for a photo shoot for the 1984 Lafayette football media guide.

Provided by trainers working for Hoxie Brothers Circus, the leopard, clearly agitated by the exposure, roared whenever a student-athlete who was to pose next to the cat came near. The cover ended up showing the rather cocksure cat, head turned and red tongue sticking through a pair of menacing fangs on its lower jaw.

Another appearance at Lafayette of a wild spotted feline, an ocelot, was documented in the February 1943 issue of National Geographic magazine. It included a photograph and caption, noting that the cat was captured by a Lafayette student in Venezuela and brought to live in a fraternity house.

Perhaps the Class of 1958, known as the Leopard Class, got it right when it commissioned the 650-pound bronze leopard statue, which faces toward Oechsle Hall. The class researched many options for its gift to the College but determined that Lafayette, unlike other schools, lacked a statue of its mascot. Members of the class still gather at the statue for reunions, a tradition since 1958.

In honor of its 50th reunion, the Class of 1958 commissioned a slightly smaller copy of the leopard statue for Metzgar Fields.

Another fact to roar about is that Lafayette is the only NCAA Division I institution with the leopard as its nickname or mascot.

“The leopard mascot is synonymous with Lafayette College and the athletic program,” says Scott Morse, senior director of communications-campus life and athletics. “Our fan base goes crazy when they see the mascot because they know the leopard energizes any venue.”