The periodic table marks its 150th anniversary. Which elements are profs eager to celebrate?

It’s one of the most iconic images in science. It hangs on the wall in almost every chemistry classroom, lab, and lecture hall in high schools, colleges, and research institutions worldwide. Peek in a residence hall, and you’re bound to find a pop-culturized adaptation, charting the worlds of Star Wars, Harry Potter, or Game of Thrones. 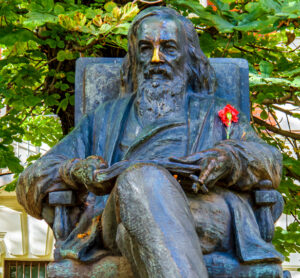 The renowned periodic table of elements is celebrating an anniversary this year: It’s been 150 years since it was first compiled by Dmitri Ivanovich Mendeleev. The Russian chemist devised the table as a means to express a scientific truth he discovered: the periodic law. This law defined relationships among known chemical elements when arranged in order of their atomic weights. This organization enabled Mendeleev to predict the existence of yet-to-be-discovered elements. Over its history, the table has been revised and improved to reflect advancements in science; it’s considered remarkable for its fundamental scientific value as well as its sustaining relevance.

To celebrate this notable milestone, we broke out the balloons (helium), bubbly (carbon dioxide), and cake (oxygen, hydrogen, sodium, carbon, just for starters) and asked faculty members to share their favorite elements. 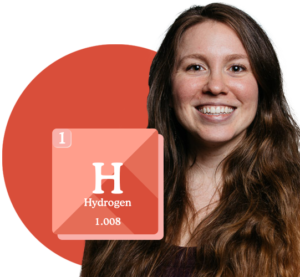 Why? It is the simplest atom, just a proton and an electron, but it is involved in—and crucial to—so many of the complex processes we experience in our everyday lives! 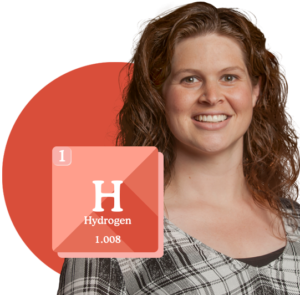 Why? It’s the first element. It’s incredibly simple, made of a proton and an electron. It’s sometimes forgotten because it’s so simple. It’s sometimes thought of being uninteresting, but it’s in almost everything. It’s fundamental to life. Carbon is known as the element of life, but it’s always attached to hydrogen. Almost every living molecule has hydrogen in it. It’s kind of a misfit in that it doesn’t act like any of the other families of elements. 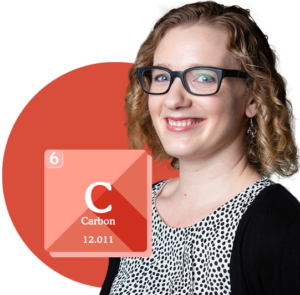 Why? Carbon is one of the most important elements on the planet. All living things contain carbon. Pure carbon is a diamond if the atoms are arranged one way in three dimensions. If arranged in a different way, it’s graphite. I think that’s so cool, that if you tweak it, it becomes something else. I worked with two-dimensional carbon in graduate school and as a post-doc I studied diamond. I even studied the diamond in my engagement ring [with a spectrometer] to verify it was a true diamond. I made a graph of the data, and I gave it to Chris [Hawley, see below] right before our wedding. 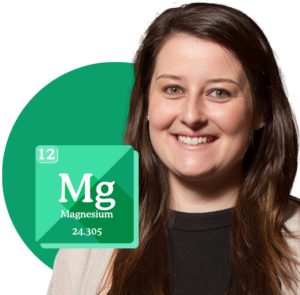 Why? Not only because its chemical symbol is the same as my initials—MG—but also because magnesium can be used as a sacrificial anode to protect other metals from corrosion, such as those found in boats and pipelines. For this reason, we study magnesium in my ES 231: Nature of Materials class. 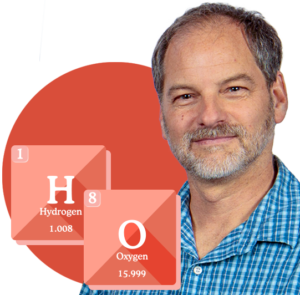 Favorite elements: Hydrogen, No. 1 and Oxygen No. 8

Why? I’m afraid I can’t choose just one. When hydrogen and oxygen are combined in just the right proportions, they form that wonderful fluid that is esssential to life and familiar to all-—yet also so mysterious and captivating and magical and worth spending a life studying. 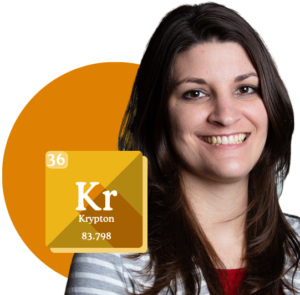 Why? Krypton is a member of Group 18, which makes it one of the six naturally occurring noble gases. The noble gases are characterized by their inert nature. They are generally highly nonreactive when they encounter other elements due to the fact that they have full valence electron shells (which makes drawing their valence diagrams highly satisfying—it’s like completing a jigsaw puzzle!). All through high school chemistry, I remember thinking, ‘If I were an element, I’d be a noble gas.’ I’m such a nonconfrontational person and tend to steer away from other people’s drama! Add this to the fact that krypton’s atomic number is a perfect square—36—and its name shares a root with the field of cryptography—both of which satisfy my inner math nerd. That means I just have to pick krypton! 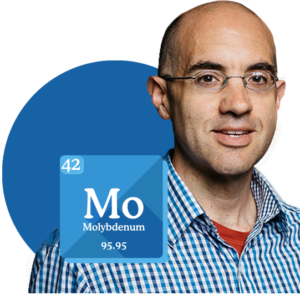 Why? If you take vitamin supplements, you’ll find 50 mpg of molybdenum in your mult-vitamin, as it is an essential element for life. Apparently, people deficient in Mo may have adverse reactions to sulfites in foods. Wine has sulfites, so it’s really important not to be deficient. Just like most things that are good, you have to want it: Mo is found within minerals, so you have to tease it out by various and sundry means.

As a teenager I landed myself a French bicycle (a Peugeot), a beautiful steel bike. Whenever I looked down to shift gears, I saw the label on the frame, announcing the Reynolds 501 Cromalloy tubing.  Chromoly is an alloy. Molybdenum is apparently corrosion-resistant and welds well, perfect for a bike frame! When I was a kid, I had to track down what “chromoly” steel was, like in the Stone Age before the internet—I had to ask people, like the owner, Tomias, of Genesis Bikes (back when it was on Northampton Street), read Bicycling magazine (in print form). This was before fancy carbon bikes (let’s just skip right past aluminum, please). I was transfixed by this seemingly mundane element in the middle of the periodic table as having awesome properties to build what I thought was an exotic bicycle for a kid. 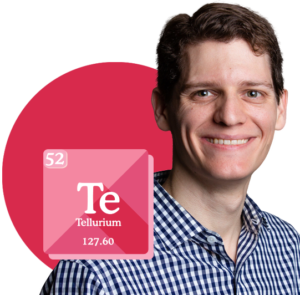 Why? Tellurium has an odd crystal structure. It’s not uniform in all directions, and that leads to interesting ways of shaping nanostructures. That’s particularly interesting to me because I grow things that are on the nano scales. When you bring these elements down to a small scale, quantum mechanics show up. It was originally discovered in Transylvania. If you get overexposed to it, it gives you garlic breath. So students have nicknamed it “the vampire element.” 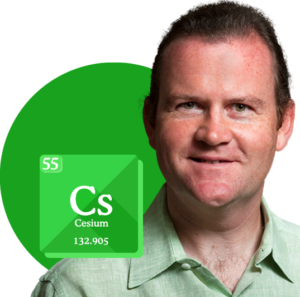 Why? A cesium atom has 55 electrons. Of these electrons, 54 are bound tightly close to the nucleus, while the last one is in an orbit far from the nucleus. It is so far from the nucleus that cesium atoms are the largest atoms of all the elements! This electron’s large distance from the nucleus makes it easy to manipulate in atomic physics experiments, including atomic clocks. Interactions of this electron and the cesium atom nucleus create microwaves that oscillate 9,192,631,770 times a second. In fact, this is the official definition of one second: It is 9,192,631,770 times as long as one oscillation of the “unperturbed ground-state hyperfine transition frequency of Cesium-133.” When the watch on my wrist is ticking off seconds, it is actually doing its best to imitate cesium atoms! 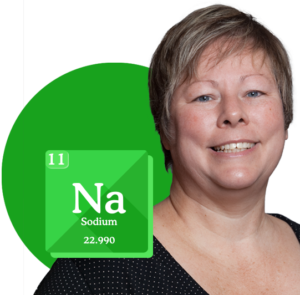 Why? Sodium is found in nature primarily as a salt and has made a huge contribution to our biology, our history, and our palates. Sodium salt provides a constant ionic environment for our bodies, but it’s also one of the main ionic carriers of electrical charge in the nervous system. It is essential to our well-being and that makes it interesting to me. 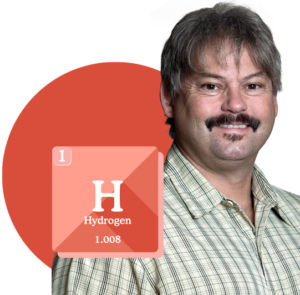 Why? “For several reasons: (1) It is number 1, with an atomic weight of 1. (2) Although it is the lightest element in the periodic chart, it punches way above its weight when forming an acid. (3) Hydrogen in an acidic solution plays a tremendous role in weathering rocks, which ultimately allows for erosion and landscape evolution. (4) Hydrogen plays a crucial role in breaking down silicate minerals, especially feldspar, which results in the formation of clay and soil.” 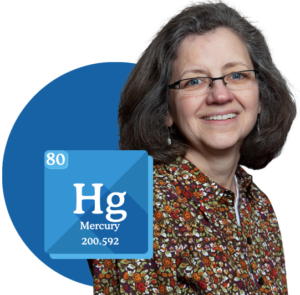 Why? “Mercury is a liquid-silvery metal also called ‘quicksilver.’ The use of mercury in hat making in the 18th and 19th century led to the phrase ‘mad as a hatter’ due to mercury exposure in the hat-making process. The effects of mercury poisoning in humans are well documented, which led to fishing and swimming bans. And while mercury has no known biological function, bacteria have sorted out a pathway to convert the highly toxic forms of mercury into the non-ionic and less toxic form.” 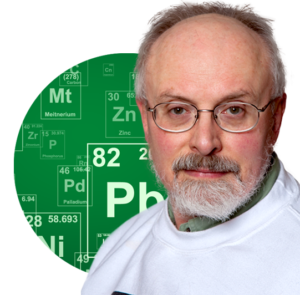 Why? Every element on the periodic chart plays an essential role somewhere in astrophysics. I like them all.