It was at some point leading up to his first jump from a C-130 airplane two summers ago during Airborne School at Fort Benning, Ga., when Jake Liedtka ’20 had a realization. 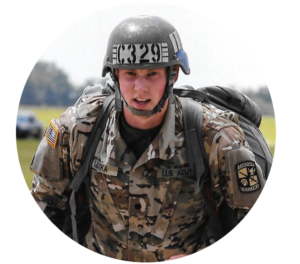 “I was deathly afraid of heights as a kid,” he recalls. “So the first time we were in the air on the third week I was scared, honestly.”

Five jumps later, Liedtka’s focus shifted to executing the tasks in front of him.

“It all happens so quickly, and you don’t really think about the fact that you are about to jump out of a plane for the first time,” Liedtka adds. “But when my parachute was hooked up to the line, my legs were shaking a little bit.”

“The adrenaline rush is the cool part and makes you want to do it again.”

This past summer, Jeffrey Kordenbrock ’21 was jumping out of a Sikorsky U-H 60 Black Hawk helicopter during Air Assault School at Fort Benning.

Kordenbrock excelled at a school with a 50% dropout rate. 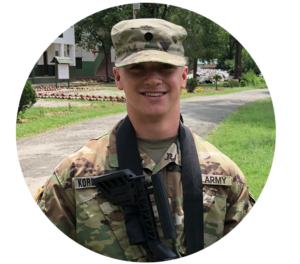 “I wasn’t scared, nah,” he says. “It was fun, except for burning my hands all the way down [out of the helicopter]. When you jump from that high up and you stop that quickly, it generates a lot of heat. You are supposed to put your hands at your back, but it still happens.

“You could get thrown out of [Air Assault School] if you are missing one thing from your rucksack. I guess that’s what makes it such a hard and prestigious school. The hardest part was just the constant stress and making sure everything was perfect.”

Kordenbrock and Liedtka roomed together last year at Lafayette. They drive three mornings a week to Lehigh to do physical training with the Steel Battalion, which is comprised of ROTC members from eight area colleges.

They return to campus for class before heading to football practice at 4:30 p.m. each day, then dinner around 7 p.m. before studying for several hours.

Then they wake up and repeat. 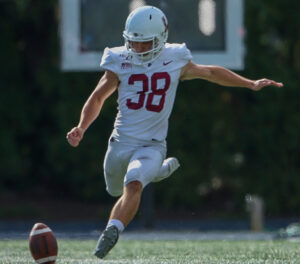 Kordenbrock is a kicker/punter and mechanical engineering major from Maryland with a family history full of military experience, including his father, uncle, and grandfather.

Liedtka is a wide receiver and economics major from New Jersey with only an older brother with any military background.

They both are looking forward to a future in active duty in the Army upon graduation.

“We share a lot of time together,” Liedtka says. “It’s nice having someone else doing all the same kinds of stuff. It can be a lot. There’s a lot going on in a season.”

Kordenbrock spent time in summer 2018 in Nepal as part of a month-long Cultural Understanding and Learning Program, training with the Nepal military.

“I was the only freshman chosen [for CULP] from Fort Knox. It was a really cool experience,” he says. “They were all either Hindu or Buddhist … In some ways, they were similar; others, very different. Their soldiers were all small and agile. All had a very high intellect.”

Kordenbrock had to work to stay in some form of football shape ahead of preseason workouts.

“We ate rice every single day,” he says. “I still haven’t eaten any Indian food since then.” 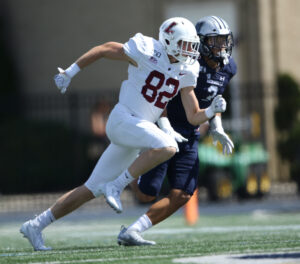 Liedtka graduated from his childhood fears in summer 2018, then attended the 40-day Advance Camp this past summer in Fort Knox, Ky.

“You learn about all types of things like marksmanship, land navigation, classroom instruction, and about two-and-a-half weeks of field training exercises. That’s where we run through missions and people alternate as platoon leaders and squad leaders,” he says.

Kordenbrock will spend part of his 2020 summer at Advanced Camp, then, like Liedtka, will wait until the end of September of senior year to find out where military life takes him.

“I am very excited,” Liedtka says. “A lot of people are looking for their first job. For me, it’s a totally different thing. I am still waiting to hear about my job in the Army. I feel very prepared.”

Kordenbrock is getting there too. Along the way, he’s picking Liedtka’s brain about Advanced Camp.

“I have loved [the military] my whole life. These experiences helped solidify my opinions on the military. It’s definitely not for everybody.”