When certain brain proteins misfold and twist together in a confused mess, it can result in brain damage. Prof. Justin Hines is working to untangle the clutter. Can his work help avert a global health epidemic?

In his lab in Hugel Science Center, Justin Hines is working to untangle a mystery. A complex one. And he’s up against a ticking clock.

Currently, there is no cure or treatment that reverses, significantly slows, or prevents the neurodegenerative disorders Parkinson’s and Alzheimer’s.

It’s a modern-day health care crisis that’s on the verge of becoming a global epidemic, says the associate professor of chemistry.

Consider the numbers: A study published in The Lancet reported that 6.1 million people globally had Parkinson’s in 2016, compared with 2.5 million in 1990. Experts predict that by 2030, an estimated 1.2 million Americans will be afflicted. Alzheimer’s shares the same grim prognosis—with even higher numbers. The Centers for Disease Control found that deaths from Alzheimer’s doubled from 1999 to 2014; researchers estimate the disease will impact 16 million Americans by 2050.

Hines and his team of student researchers (see sidebar) are uncovering important insights about the molecular makeup of these disorders and actively sharing their findings with the wider scientific community. They have authored 13 journal articles with more papers underway. Their work has been endorsed by the National Institutes of Health (NIH) with three-year grants awarded in 2014 and 2017.

“The hope is that someday, once we understand the pathology of these diseases, we might be able to have effective treatments,” Hines says.

Proteins play a central role in all biological processes. These linear strings of amino acids usually fold spontaneously without issue into their final structure. But sometimes they twist into a disordered form and clump together, which prevents them from functioning properly. This is called aggregating—it can cause brain damage and is at the heart of neurodegenerative diseases, Hines says.

There is a special group of proteins called “chaperones” that work to guide proteins so they fold correctly and don’t aggregate. “Chaperone proteins can ensure that other proteins are folded properly, that they stay folded, that they don’t misfold,” he says. “Think of them like chaperones at a middle school dance. They prevent proteins from becoming tangled in inappropriate ways.”

Hines has been studying the relationship between chaperones and a specific group of misfolded proteins known as “prions” in yeast since 2007, when he was a postdoctoral researcher at University of Wisconsin.

During Hines’ 2014-2017 grant cycle, he and his students made an important discovery. “One of the things my lab has been responsible for bringing to light is that there are specific chaperone functions that act on specific aggregates in the yeast,” he says. “It’s not one generic function. We published two papers that showed specific chaperones have distinct functions that are needed for particular aggregates. It’s a significant finding.”

“In yeast we have an example of the chaperone proteins being exceedingly effective at fragmenting the aggregates,” Hines says. “We want to understand how those chaperones do that. Once we, as a field, understand that, we will hopefully be able to treat these diseases.” 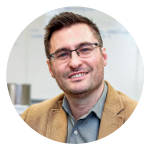 Thanks to NIH funding, plus support from Lafayette’s EXCEL Scholars program and the Dorflinger Fund, Hines employs several student researchers. The lab assistants gain valuable scientific experience plus the opportunity to co-author papers and present their work at national conferences. In recognition of his work as both a researcher and educator, Hines was selected to receive the prestigious Henry Dreyfus Teacher-Scholar award from the Camille and Henry Dreyfus Foundation in 2018. (He is only the second Lafayette professor to ever receive the recognition.) Here’s what three of his current researchers say about the experience. 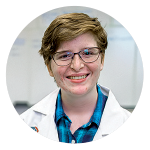 ”I didn’t realize how patient you have to be to do good science. It takes a lot of time and a lot of messing up to actually get the results you want. It is really nice to see the results of an experiment working. It’s also nice to know that your work will end up contributing to science. It makes it all a lot bigger than yourself.” 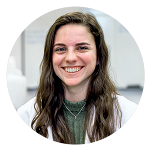 ”The hardest part about working with living organisms is that we have to work to their schedule. Sometimes our lab work will be delayed because the yeast cells are growing slower than expected, and other times we have to rush to get the lab work done before the cells overgrow. Because of this, I have learned to manage my time more efficiently.” 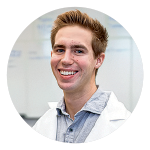 ”I’ve learned that it’s so important to be adaptive and patient! As expected with science, planning and troubleshooting experiments is an everyday occurrence. I strongly believe that my experiences in lab further developed both my critical thinking and communication skills—both of which are necessary to find success on any research team. ”