There’s a small sign posted near the Skee-Ball machines at Jenkinson’s South Arcade on the boardwalk in Point Pleasant Beach, N.J. It reads, “Limit 2 Jackpots Per Day.” It’s a coveted prize. Earn the jackpot and you’ll get 1,000 extra tickets—but most people probably don’t even notice. The jackpot, after all, is 600 points. That means an ambitious kid with a freshly loaded card (arcades went away from coins years ago) would need to roll a baseball-sized composite wood and plastic ball up a 6-foot ramp so that it launches in the air and perfectly lands into a tiny 100-point hole on the top right or left corner of the machine. They would need to repeat the feat six out of nine tries. This, for arcade-newbies, is a nearly impossible challenge.

So, why limit the jackpots?

“I won two big-screen TVs in one night there in 2014,” says Elan Footerman ’20, a mechanical engineering major. That required winning more than 50,000 tickets. He paid less than $100 in tokens. The next day, the sign went up.

Over the next five years, Footerman has cashed in on his deft rolling skills in arcades and bars throughout New Jersey and New York City. He’s won even more TVs, an iPad mini, and gift cards. Though no prize compares to what he earned the evening of Sept. 29 at Full Circle Bar in Brooklyn. While donning a maroon Lafayette College T-Shirt, Footerman claimed the title of best Skee-Ball player in the world, earning $10,000 and a cream-colored blazer. 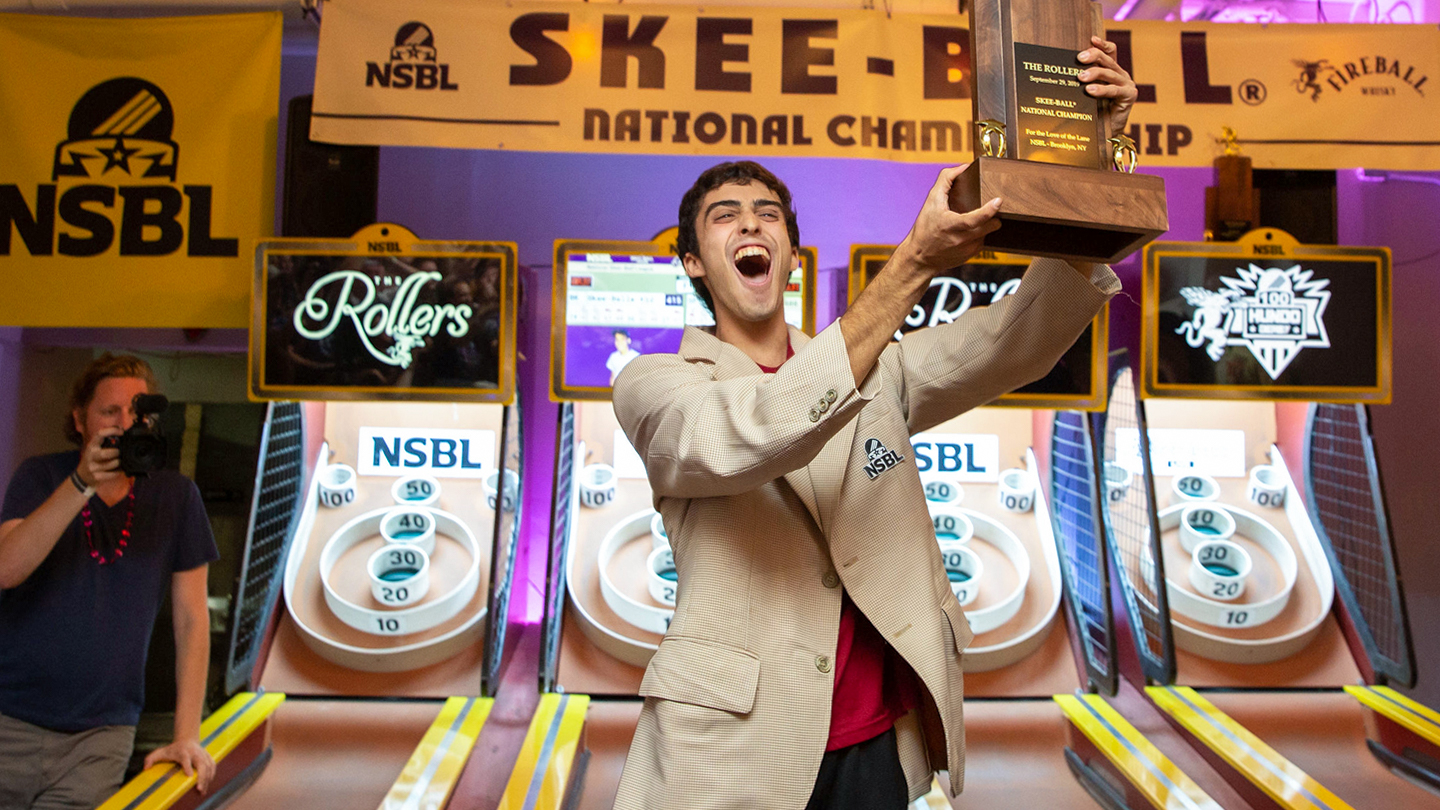 “I honestly still can’t believe it,” he says.

Footerman started playing the ubiquitous arcade game when he was 6, spending nights and weekends during the summer on the Jersey Shore honing his rolling skills. He became skilled at launching a ball to the right or left 100-point pockets (avoiding the lower-point and easier pockets up the middle) until he could almost always sink half of the allotted balls. Arcade workers started to notice.

Watch 2019 Skee-Ball® Open – The Rollers Final from NSBL on www.twitch.tv

“I would walk in and hear them say, ‘Hey, there’s the Skee-Ball kid,’” Footerman says. The moniker stuck as he entered the blossoming world of competitive Skee-Ball.

This past summer, the freshly turned 21-year-old Skee Ball Kid finally was able to try and qualify for the National Skee-Ball League Championships. The competitions occur exclusively in bars around the country. He played 80 games over several nights in Brooklyn, earning an average score high enough to give him a slot in the championships.

Thirty-seven rollers from around the country qualified. Footerman sailed to the final game, where he faced the tournament favorite and three-time world champion, Joey “The Cat” Mucha.

“Coming into this tournament, I had never played where it was this loud,” Footerman says. “Normally it’s just my family watching in an arcade. There were more than 200 people there.”

A sanctioned National Skee-Ball League game consists of 10 frames. Each frame equals nine rolls. Competitors alternate frames, and the winner is the one with the highest average score. Because Footerman had the lower seed going into the final match, he had to roll the first frame.

“I knew The Cat would go for 50s only,” Footerman says, describing the “up the middle” strategy used by his opponent. “He could hit it eight out of nine times consistently.”

To counter, Footerman aimed to earn “hundos” only—Skee-Ball speak for targeting the hardest and highest-point pockets. Going into the last frame, Footerman needed to hit at least four 100-point pockets to regain the lead. He whiffed on the first three. That’s when his single most important skill became essential.

“The pressure doesn’t get to me,” he says. “I took a step back and took a breath.” He wiped his hands on his Lafayette shirt and sunk three 100-point pockets in a row. He regained a lead that Mucha couldn’t overcome. The crowd erupted into the chant, “Skee-Ball Kid! Skee-Ball Kid!” 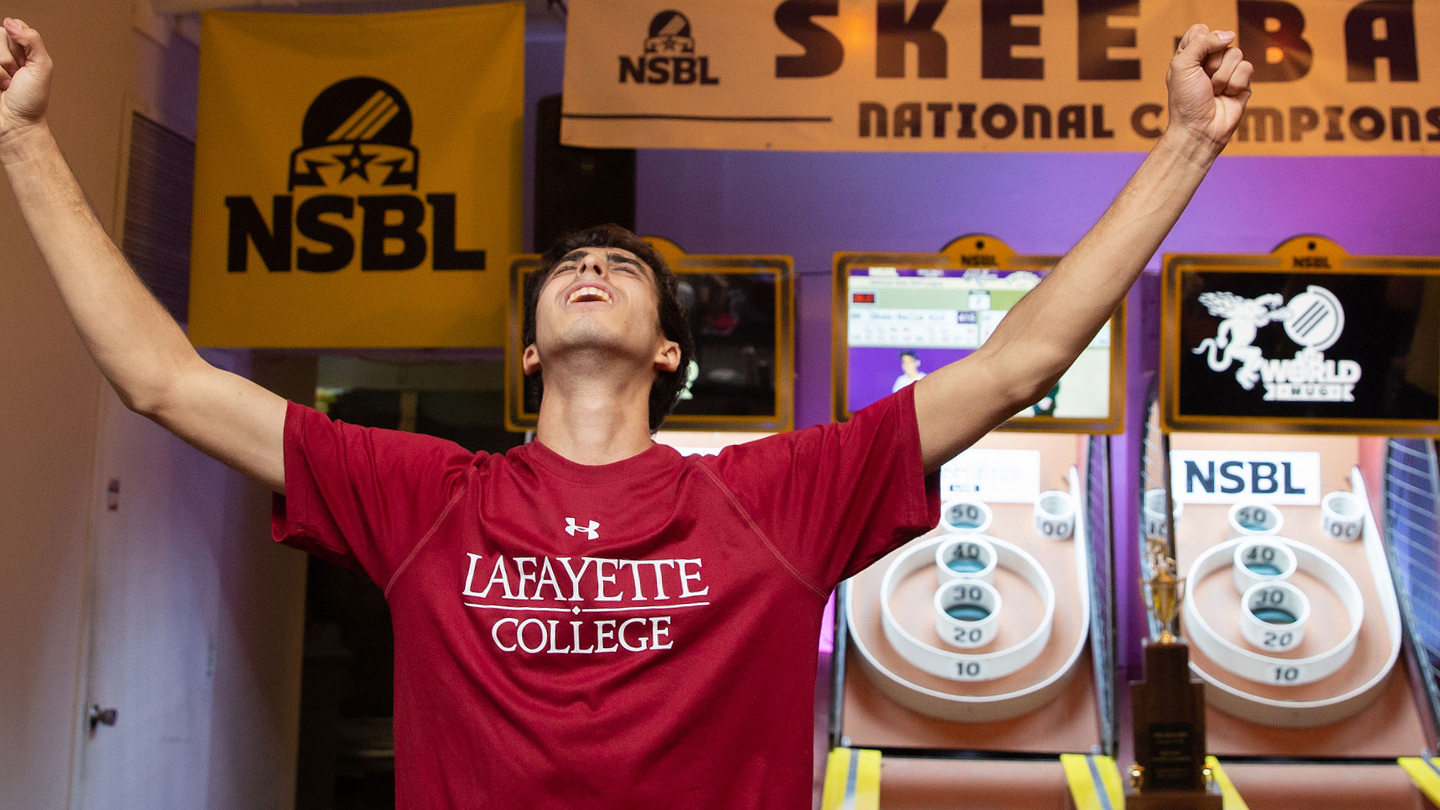 Announcers on the livestream (yes, there was a livestream) proclaimed, “The future of Skee-Ball is here.”

A few weeks after the championship, Footerman arrived at the Kids Quest arcade in Bethlehem, Pennsylvania’s Wind Creek Casino to chat about his victory and pass along some of his Skee-Ball wisdom. His first lesson: Don’t assume Skee-Ball machines are all equal.

The cartoonish, noisy iterations called Ice Ball in the corner of this arcade are kind of like playing on a divot-filled city golf course, Footerman said. Still, he tossed the plastic ball in his right hand like a pitcher warming up, eyed the left corner pocket, and delicately rolled it up the ramp.

“It takes awhile to warm up and learn the machine,” he said while missing several shots in a row. “You want to be smooth. Let it roll off your fingertips.”

Over the course of seven frames, Footerman struggled to find a rhythm. That is, until a video camera started to record. It was like a switch had been flipped. Footerman, as he displayed weeks before, thrives under pressure. He sunk ball after ball, winning the bonus and the arcade’s highest-ever score.

In 20 frames, he earned enough tickets to get a giant decorative guitar pick. He said he plans to hang it in his dorm room, which is already filled with bounty from his Skee-Ball skill. This writer earned enough for a tiny package of Air Heads and a rubber ball.

On the walk out, Footerman reflected on what he wants to do next. He’s aiming to get a real, full-time job after graduation. But he is going to keep playing. “I want to buy a Skee-Ball machine with my prize money,” he said. He intends to reclaim his title and the cash next year.

He also said, while smiling, that he hopes the administrators at Lafayette might consider buying the game he loves and placing it somewhere on campus.