When she enrolled at Lafayette, Jennifer Womer Kreatsoulas ’99 had been a student-athlete all her life. Two short years later, she wouldn’t be able to set foot inside a gym.

Growing up in Lower Bucks County, Kreatsoulas cycled through basketball, softball, and soccer, always finding joy in socializing with teammates and pushing herself physically even though she never competed at an elite level. When she arrived on Lafayette’s campus, she immediately yearned for that missing piece.

“My life had always been organized around sports and school, and I felt out of balance not having that physical outlet,” she says.

So Kreatsoulas went out for the crew team. Instantly, she found the camaraderie she was looking for with her fellow rowers.

“I felt like I found a family on campus,” she says.

At a time when many young people struggle with the transition from high school to college—being on their own for the first time, increasing academic pressure, and where they fit in an entirely new social scene—Kreatsoulas was thriving.

“My freshman year was absolutely wonderful,” she says.

But something changed, like a switch flipping, the following fall. Kreatsoulas, a straight-A student and English major with a strong work ethic, had always been something of a perfectionist. She suddenly began to turn that attitude toward her own body.

“I had never thought about my body in any kind of way before, good or bad,” she says.

But when her coach made an offhand comment one day about being able to tell how hard the girls were working by how much their bodies changed, she latched onto the idea. “I wanted to please my coach and be the best team member I could be,” she says, “and I felt that the only way I could prove myself through my body was to shrink it, since socially, that’s a message we’re fed all the time.”

Kreatsoulas laser-focused on this new challenge with the same determination she previously devoted to keeping up her grade point average. She began systematically eating less, cutting out entire food groups, and obsessively working out.

“I would go to the gym multiple times a day,” she recalls. “I rationalized it as a lifestyle, as doing something healthy for myself. I wanted to change my body to prove I was working hard.”

Her body did change, but not for the better. Friends expressed concern over how much weight she’d lost and urged her to see a school counselor. At the time, however, there weren’t many resources available to deal with eating disorders (ED), or much awareness about them. Kreatsoulas’ parents, back home in Fairless Hills, had no idea how dire the situation was until they received word their daughter needed to be hospitalized due to lack of nutrition. 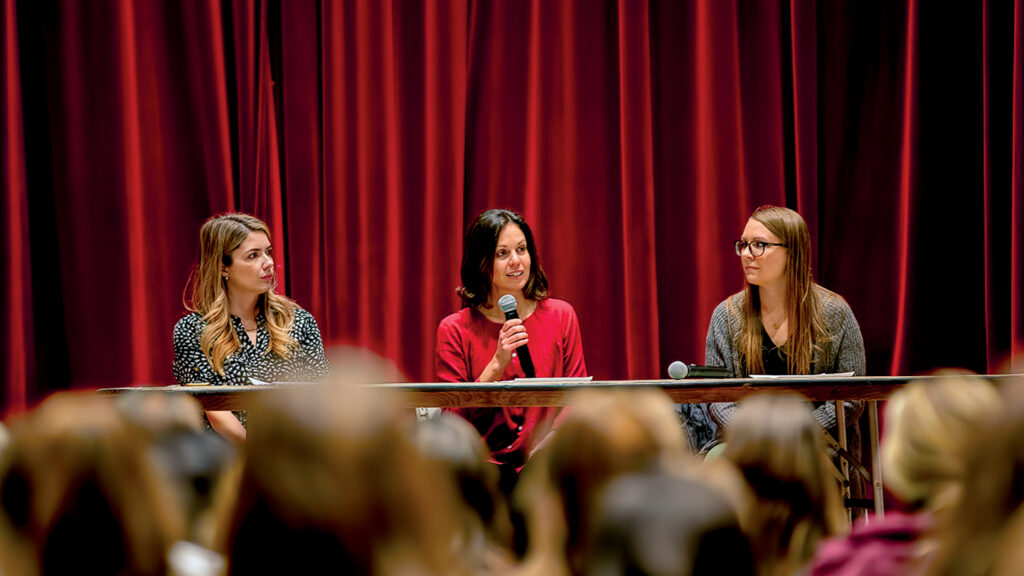 Jennifer Womer Kreatsoulas ’99 (center) participated in a body image panel on campus in November. The event was sponsored by Live Well and Kappa Kappa Gamma.

The treatment Kreatsoulas received enabled her to better understand her behaviors and just how complex eating disorders are—not just a diet gone too far or an obsession with vanity.

“After I went to treatment and learned about how eating disorder symptoms are a way to cope with painful feelings, I remember feeling so relieved, because I was worried that my preoccupation with losing weight made me shallow,” she says.

She learned that eating disorders are a serious but treatable mental illness. According to the National Eating Disorders Association, 20 million women and 10 million men in America will have an eating disorder at some point in their lives. The disorder is characterized by an obsessive preoccupation with weight, food, and body shape. It can lead to persistent eating behaviors that negatively affect one’s physical and mental health. The associated behaviors are so destructive that eating disorders have the highest mortality rate of any psychiatric illness.

After treatment at an inpatient program in Philadelphia, Kreatsoulas was able to return to campus and graduate in just one extra semester. Because exercise was a big part of her ED, she says, “I knew I could never go back to a gym or any of the activities I was doing before.”

I decided if I was going to be an expert in anything, it was going to be eating disorder recovery. There was nothing in my life I could be more authentic with than that.

Still, as she recovered, she missed having a physical outlet. When a friend suggested yoga, Kreatsoulas thought she would give it a try. Following along with a video instructor alone in her apartment seemed like a good way to insulate herself from her own overly competitive instincts. The more she practiced, the more benefits she saw. Yoga became an essential part of her healing and helped her reconnect to her own body without judgment.

“The way we live shows up on the mat, so if I’m striving to be too perfect in my pose, I start to wonder how else that drive for perfectionism is showing up in my life,” she says. “I loved being in an environment where we talk about being kind to ourselves. There was nothing to prove, nothing judgmental or critical.”

That allowed her to get to know and appreciate her body, the thing she had tried to escape for so long, and treat it with respect and care.

In 2002, Kreatsoulas became a yoga teacher and taught for nearly seven years while earning her Ph.D. in literature, which she completed in 2007. But as life got busier—job, husband, kids—she practiced less and less.

Shortly after the birth of her second daughter in 2013, she relapsed. The stresses of a newborn coupled with postpartum depression overwhelmed her, and between the sleep deprivation and hormones, she found herself falling back into the old familiar habits of starving herself and overexercising.

“There’s a whole belief system that gets formed with an eating disorder,” she explains. “It’s a way to cope and take the edge off what’s hurting. I remember thinking to myself, ‘I’ll just have a low-grade eating disorder to get through this.’ But, of course, there’s no such thing. Once it gains momentum it just pulls you under.”

On Mother’s Day 2014, Kreatsoulas found herself so weak from lack of nourishment that she couldn’t push her 11-month-old daughter’s stroller.

“I realized this is not OK,” she says. “This is not the mother I want to be, not the wife I want to be.” She sought help but resisted checking into an inpatient treatment center because it would feel like abandoning her children. When her condition continued to worsen, however, she saw no other choice.

She describes the 30 days she spent at the facility as “hell.”

“Think of doing something you’re terrified of multiple times a day,” she says. “You have to finish your meals and gain weight. I had journals of rules about food and weight and exercise. Having to break all those rules was really hard.” 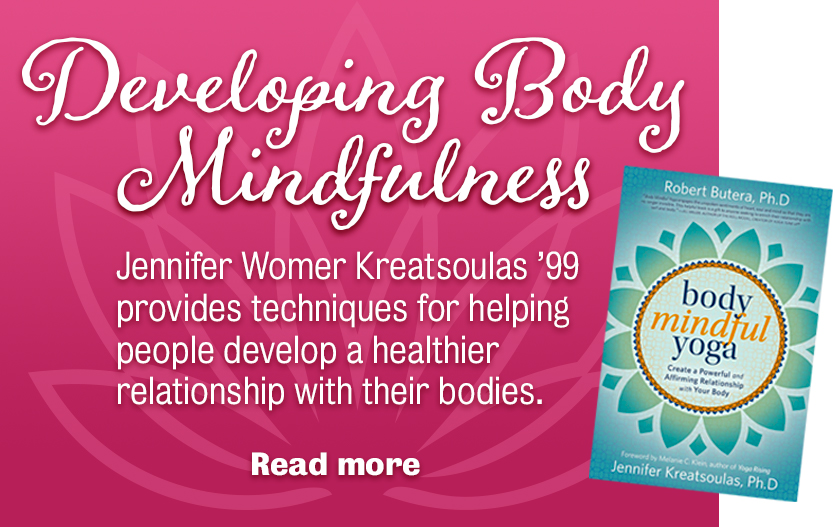 But that difficult process gave her the time and space to see what she needed to remain well. Kreatsoulas knew that none of the stressors she’d left at home would change—she would still feel overwhelmed and not get enough sleep. But she could make sure she was focusing on ways to stay healthy despite all that.

“One of those ways,” she says, “was yoga.” She found that yoga helped her breathe through all the anxiety she had around breaking her self-imposed rules. And she discovered something else, something even more life-changing: Yoga was not only a vital form of self-care, but it also turned into a way to care for others. She learned about yoga therapy, a way of incorporating the mindset and principles of practice to help with everyday life, and decided that was her calling. “I decided if I was going to be an expert in anything, it was going to be eating disorder recovery,” she says. “There was nothing in my life I could be more authentic with than that.”

Kreatsoulas enrolled in a three-year yoga-therapy program and completed more than 800 hours of training that covered a wide range of education, including yoga philosophy, yoga psychology, anatomy, biology, and neurology, plus the practices of yoga poses, meditation, breathing, and relaxation.

She left her career as a medical writer to open a private practice that focuses on using yoga therapy to help people with eating disorders. Her clients span the globe and include professional therapists, dietitians, and other yoga teachers, whom she mentors in the treatment of ED. A lot of her work deals with language, the way we speak about body image, ED, and mental illness, and how we can shift that dialogue.

“There is so much more awareness now,” Kreatsoulas says. “As a yoga therapist, the combination of my personal lived experience and professional training gives me the unique privilege to hold space for others to heal. When they know I’ve lived it, they know I really understand. There’s something really special about that. It helps people feel like they’ve been seen and heard.”

Since founding Yoga for Eating Disorders, Kreatsoulas says her life has been “an amazing journey of opportunity.” She conducts workshops and retreats, and created and hosts Real Body Talk, a monthly television show about mental health issues and body image in the age of social media (see yoga4eatingdisorders.com/real-body-talk-show). Last year, Kreatsoulas published her first book, Body Mindful Yoga. Her second book, On the Other Side of Hunger, a collection of reflections about recovering from an eating disorder, will be published this year. “There is so much healing that comes with telling one’s story,” she says. “I’m capable of everything I do in spite of ED—and because of it.”

How to Do It
Our Pulse Our People