Screen time is getting competitive. Lafayette students are championing the video-game boom

Inside the ground floor lounge of Keefe Hall, cords and wires haphazardly snake around the periphery of the room, leading to a series of monitors and computer towers that look nothing like the standard computers and laptops scattered throughout Lafayette’s library and campus buildings. An occasional chime, rattle, or explosion escapes speakers next to the machines, layered under the sound of shouts, cheers, and laughter from groups of people clustered around each monitor. For the last hour, members of the Lafayette esports club have been practicing and warming up for the final tournament of the semester, College Hill Clash.

The stereotype of a lonely “gamer,” stuck in a dark basement surrounded by junk food, eyes glued to the soft glow of a computer, has become a cliché—a largely inaccurate one too. For Gen Zers (those born after 1997), gaming is no longer a subculture. In the past decade, it has become a lucrative and widespread part of life, according to journalist Jeff Eisenband, who specializes in reporting on professional esports leagues around the world.

“This is the YouTube and Twitch generation,” he says. “If you enjoy something like a certain video game, you can go online right now and watch the best people in the world playing it.” Not only that, you can log in on your own gaming console and compete against players any time of day or night.

“It’s not like you can just go ask someone in China to play you in pickup basketball in the middle of the night,” he says. The accessibility of live online competition, plus the ubiquity and dropping cost of gaming technology, has created an explosive boom. 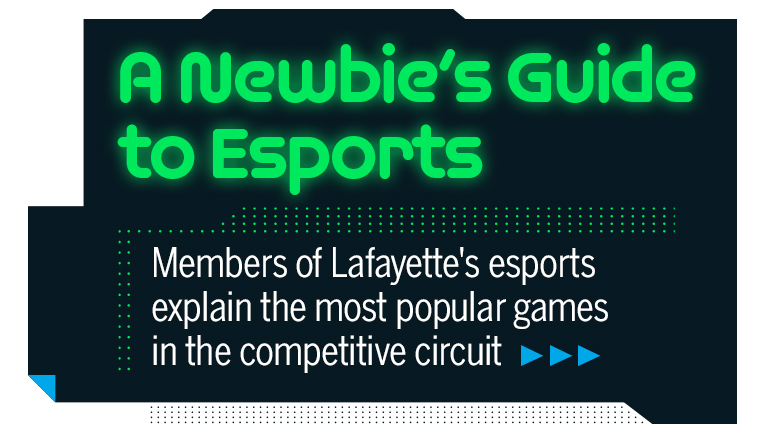 According to statistics gathered by Business Insider, esports will surpass more than $1 billion in revenue in 2019. By 2022, that number is expected to nearly double. Online viewership and participation in esports, at nearly 450 million people worldwide this year, is expected to grow to almost 700 million in the next three years, meaning almost one in 10 people on the entire planet will either watch or play an esport

Bill Yox, an engineer in Information Technology Services at Lafayette and esports adviser, says to understand the growth and culture of the phenomenon, it’s important to point out the distinction between video games at large and esports.

There is still a swath of video games where a single user attempts to navigate through a story, defeating a series of computer-generated foes until they win (using a console like Nintendo Switch or Sega Playstation to play games like Super Mario Land or Assassin’s Creed). Esports, Yox says, have to include an element of human-versus-human competition. Which means, as in baseball, basketball, football, etc., in-game strategy and skill level can evolve and improve over time.

“Gaming and esports are very different,” Yox says. “Most people who get involved in esports [like non-virtual sports] are very competitive by nature.”

Because of this, the structure, economy, and fandom of esports are incredibly similar (and in some cases intertwined) to non-virtual sports. The best players in the world rake in millions of dollars a year from tournament prize money and sponsorships. Teams train in state-of-the-art facilities with coaches and equipment staff. Traditional sports venues like Arthur Ashe Stadium in New York City sell out for tournament finals. Traditional media like ESPN are investing millions to expand coverage. Twenty-two NBA teams own their own esports teams dedicated to the video-game version of basketball, NBA 2K. The Cleveland Cavaliers are building an esports center attached to their stadium.

Perhaps the biggest difference between sports and esports? The latter isn’t limited by things like physics and real-world injuries. The style and skills required to play different esports are incredibly diverse. There’s strategy and battle games like Overwatch, which pits teams of fantastical characters (each with its set of responsibilities and strengths) against each other in war-like scenarios. There are games that completely mimic non-virtual sports, like NBA 2K, Madden, and FIFA. And there are games that fit somewhere in between, like Rocket League—basically soccer, but played with cars that can launch into the air.

Learn more about the eSports world: Joey Illuzzi ’21 shares his research on labor rights in eSports.

Despite the meteoric rise of esports over the past decade, there is still one place where its infrastructure appears to lag compared to its three-dimensional counterpart: the college campus. Which, at first blush, doesn’t make sense. Universities, after all, have brand recognition, built-in fan bases, facilities, and a student body that is an
esports demographic bullseye.

Except all traditional varsity collegiate sports are controlled by the NCAA.

“Esports in the 21st century have the chance to right all the wrongs of college sports, and sports in general,” Eisenband says. “The NCAA is trying to get involved in esports, and [those playing] esports are like, ‘We don’t have to do that. We don’t have to sell our athletes down the road and make them go under all these restrictions.’”

There’s no single organization governing all college esports. In April 2019, the NCAA voted to table conversations around collegiate esports oversight indefinitely. Instead, parent companies of each video game have partnered with, or formed their own, college-specific leagues. The two biggest are Collegiate Starleague, which sets up tournaments for Rocket League and CS:GO, and Tespa, which puts on tournaments for games owned by esports behemoth Blizzard, including Overwatch.

We may not individually be as good as many teams, but we have really good chemistry. – Kerry Stranick ’21

In 2018, Kerry Stranick ’21 and her twin brother, Thomas ’21, wanted to find other Lafayette students interested in playing Overwatch, one of the most popular esports games in the world. Kerry sent a student-body-wide announcement. Initial response was small, though she did hear from Yox, who told her he was interested in becoming an adviser if they formed a club.

“Student government thought a club based around one game wasn’t broad enough,” Thomas says. So he and his sister founded Lafayette College esports to allow students to compete in multiple games, from Overwatch (their main focus) to League of Legends to Rocket League. The club started receiving funding, approval to use on-campus space, and a spot in the burgeoning collegiate esports ecosystem.

Lafayette’s esports holds a few in-person events each semester, like the one at Keefe Hall, where students can train in person for a few hours on multiple games to compete against each other. Captained by Thomas, a team of six students competes in two Overwatch matches against other colleges each Sunday during a season, timed throughout the semester to align with most colleges’ academic schedules.

“We performed really well this semester compared to many other schools entered into the league,” Thomas says.

“We may not individually be as good as many teams, but we have really good chemistry,” Kerry continues. Which is vital in a game that to an outsider looks like a blur of color, explosions, and chaos.

The club’s standing in the game is impressive, considering the league doesn’t separate schools by size, resources, or scholarship money. And yes, there is a fast-growing amount of scholarship money in collegiate esports.

According to the National Association of Collegiate Esports (NACE esports), the largest organizing body in the space, nearly 200 schools offer roughly $16 million in scholarships for esports. Robert Morris University in Illinois started the trend in 2014.

Schools that offer esports scholarships tend to be small, with little or no traditional sports presence. Like Harrisburg University, which has only one varsity sport—esports—and is the only college to offer full-ride tuition for all its esports athletes. 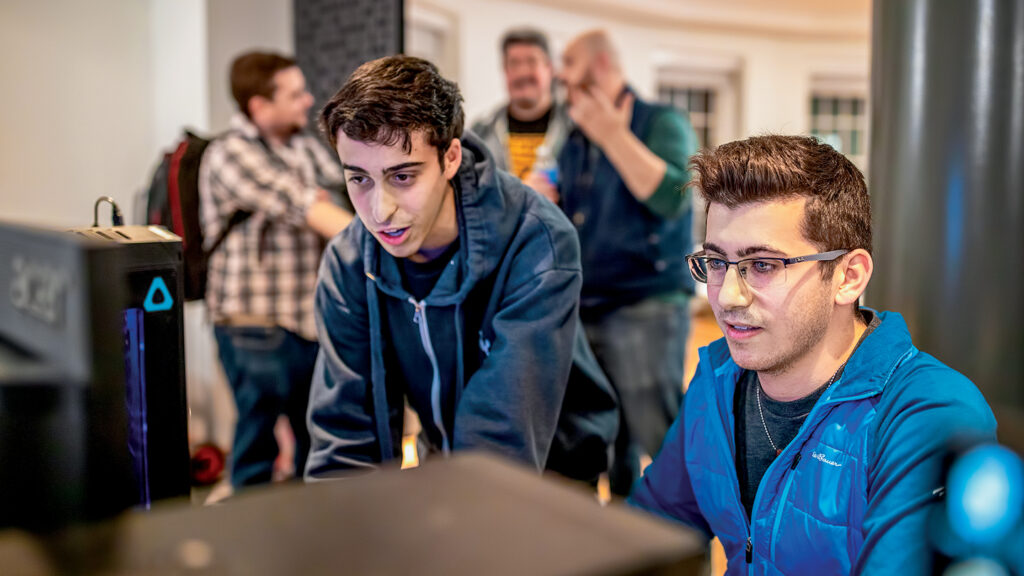 “Why would colleges offer this money? You are trying to get people to come to your school,” Eisenband says. Esports scholarships offer a splashy marketing initiative that reaches a larger pool of students.

The Stranick siblings know gaining that level of support at Lafayette would be a tough hill to climb. For now, they remain focused on two goals: to reach as many students on campus as possible and get better at Overwatch. They also are hoping to expand and create teams for other games, such as League of Legends and Counter Strike: Global Offensive.

Until midnight on a December evening, more than 40 of the club’s members practice on their machines in Keefe Hall. Yox jumps in every now and then. He’s brought a Cisco Switch owned by the College to offer a more stable internet connection.

Amid the clacks, shouts, and explosions, Thomas and Kerry wander the room, making sure everyone is signed in and having fun.

“This couldn’t happen if we didn’t have a club,” Thomas says. Later that night, he’ll comment on Lafayette’s Twitch stream as fellow members play Overwatch, Rocket League, CS:Go, and League of Legends. Perhaps skilled high schoolers will see the stream and know they have a home with fellow esports players on campus.