Side effects from your initial Daily Dose may include a desire to bone up on some American history basics like the battles of Lexington and Concord, the War of 1812 or the Salem witch trials.

From there, perusing the ever-expanding free online video collection produced by filmmaker Tom Page ’79 may lead to an uncontrollable appetite for more obscure moments in history —

the Great Molasses Flood of 1919, the Cuyahoga River fire of 1969, or perhaps the bombing of the Oregon coast by the Japanese Navy in 1942.

Before long, Daily Dose will become a daily ritual. You won’t be able to start your day without it. You’ll find yourself binge watching, not in a Netflix kind of habituation, but in a mind-stimulating, curiosity-seeking way.

Satiating his love of history and providing informative and entertaining resources for educators and the lifelong learners at the same time, Page started to make three to four-minute microlearning documentaries during the early days of the first COVID-19 lockdown. His videos cover world, military, and American history, as well as short films about emerging technologies and breakthroughs in science and medicine.

Putting his Lafayette English degree to work, Page handles all aspects of research, scripting, voice over, and visual evidence acquisition. With his son, Drew, who manages development and marketing, building out the website and engaging audiences via multiple media channels, the duo formally launched the Daily Dose in June 2020, under the corporate banner of Page Two Productions.

Their work is rooted in microlearning, a short, focused learning session, usually three to five minutes in length, which helps the human brain remember the session’s content at a much higher retention rate than standard methods of sustained or endurance learning. “Typically designed around rich media content, microlearning provides a learner-centric approach to both educational retention and employee training,” Page says. 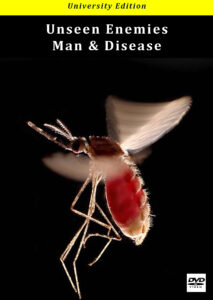 Page set sail toward the Daily Dose in December 2008 when he sold InFluENT Medical, an international surgical device company with two FDA approvals for the surgical treatment of obstructive sleep apnea. After the sale of his company to Medtronic, he chartered a new course, making documentaries; his 2013 Unseen Enemies: Man & Disease, a chilling chronicle of human infectious diseases, has been purchased by more than 30% of all U.S. colleges and universities. At the same time, he also turned to writing both fiction and nonfiction books about American history.

Now focused full time on the Daily Dose, Page has found his ideal preretirement gig producing short films that feed his interests and the interests of others who have discovered the free ad-supported content. He has made more than 240 of them, with a goal of 1,500, at which time he plans to sell the enterprise and enter retirement full time.

Ideas for Daily Dose percolate from multiple sources and inspirations.

Fans hungry for more history videos submit their requests regularly, Page says, recalling a recent burst of suggestions that included the Halifax explosion of 1917 and the Great Molasses Flood, which was already live by the time the note arrived, and the Cuyahoga River fire, which aired earlier this year.

Like others who contact Page, the sender referenced what he assumed was Daily Dose’s expansive “crackerjack team of researchers.” 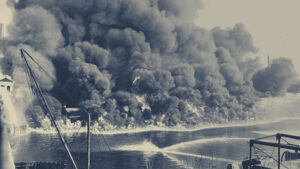 “Little does he know, it’s a one man army,” Page laughs. “All of these ideas remind you that these little known moments in history had consequential outcomes. The Cuyahoga River fire started an environmental activism movement that spawned the EPA and forced corporate America to clean up its act.”

Page has already started looking into the Halifax disaster, a volatile shipping accident that flattened 1 square mile of Nova Scotia’s capital city. For him, the more misty the subject, the better.

It generally takes five or six hours for Page to produce a three-minute episode. Finding the right visual evidence can be the most time-consuming part of the production process, he says, but once everything comes together, all that remains is editing, followed by selecting the proper background music. Daily Dose publishes one episode per day, Monday through Friday.

“By the time I’m done with an episode, I’ve learned a lot. That’s what makes it fun,” Page says. It’s building content for an audience to enjoy and learn something new every day.”

His audience base is expanding, but for Page there’s nothing like receiving positive feedback from someone nearby.

“Every day when I get online to check my emails, business and investment activity, I always pause and first check out the Daily Dose,” says David Watt, Page’s next-door neighbor in San Marcos, Calif., and a member of their “old guys” book club.

“The pieces, generally about three minutes long, are well written and delivered very effectively by Tom. They are both entertaining and informative,” he adds. “My favorites are the ones that I knew very little about before watching the Daily Dose, Mosby’s Rangers and the New York City Draft Riots of 1863. My clear favorite was the Marshmallow Test.”

“While the rest of the world was baking bread, doing puzzles and adjusting to life on Zoom, Tom created a unique pandemic project that managed to tie together his love for history, obscure information, filmmaking and collaborating with his son,” says Lisa Kassel ’79, a member of the College’s Board of Trustees and former president of Lafayette’s Alumni Association. “Who doesn’t want to expand their knowledge of such diverse topics such as the history of peanut butter, the Roaring 20s and the Pony Express?”

Friends with Page since their college days, Kassel instantly tuned in to Daily Dose and added it to her daily routine. She has shared it widely in the hope that others would support Page’s work.

“I love how Tom weaves together historical details, vintage footage, music and a great voice-over,” says Kassel, whose husband, Mitch Winter ’79, was Page’s roommate in their first post-Lafayette apartment. “It was a legendary space: roach-infested, complete with a shower in the kitchen. I’m waiting for a Daily Dose on roaches and New York City tenements.”

Acutely aware of the spread of misinformation and disinformation on dubious websites, Page probes the most reliable resources available, such as the National Archives and the Library of Congress, whose digitized collections are available to the public, to research his scripts.

“I can go in there and snag some pretty remarkable evidence,” he says. “Fact-checking is one of my biggest vulnerabilities. We want to make sure that the content is accurate. Sometimes I’m done in three to five hours. My longest took 11 hours.”

He credits Lafayette for permanently imprinting critical thinking skills on him and his work, and Donald L. Miller, John Henry MacCracken Professor of History Emeritus, for instilling a passion for history.

“He was my favorite teacher at Lafayette,” Page says. “He made history real to me.”

Page, who’s gaining about 40 followers a day on Facebook, YouTube, and the Daily Dose website itself (dailydosenow.com), is well aware of the competition and quick to assess it.

“There’s a lot of competition out there,” he says, pointing to sites like Crash Course, which produces animated educational videos, and Reading Through History, which provides resource materials and educational videos for history teachers. “And it’s amazing, the varying quality of their work, yet it’s just insanity, the amount of their monthly revenues.

“We’re getting organic growth based on what teachers are assigning high school students to study,” Page notes. “So we see these numbers growing. We aren’t getting that organic growth yet. But I think it’s more than people studying history. It’s people who enjoy learning something new every day. And that’s sort of the premise we came up with.”

Could there be a topic still missing from his working list, maybe, perhaps, a video about the life and times of the Marquis de Lafayette?