As COVID-19 sent the Lafayette community into quarantine and uncertainty, students, faculty, and staff alike drew strength from the College’s roots and traditions, and made 2020 a year to remember.

When Lafayette College’s student-run newspaper, The Lafayette, published a March 13, 2020, letter from then-editor Claire Grunewald ’20, she shared, “While the suspension of most college activities may imply there wouldn’t be a lot to cover, we view this situation as the very one in which we are supposed to provide the most up-to-date coverage and information for our community.”

Throughout the past several months, current editor Ben Fuller ’21 and managing editor Andrew Hollander ’21 found out just how much weight those words carried. Like other colleges across the country, they decided to halt their print editions and move operations to exclusively digital reporting at a time when thousands of students displaced by the spread of COVID-19 became the biggest news story of their lives to date.

“The reason that we were successful this semester and why we were able to keep providing news was because of the relentless devotion, talent, and willingness of our staff to participate—especially our editorial board. They were all committed from the beginning,” says Fuller. “We wanted to have a place where the information about COVID-19 was aggregated, but we were also following many other important stories, especially related to the racial justice movement. It was because our staff was interested and passionate that we were able to push these ideas through.”

The Lafayette has published over 170 stories since social distancing began in March 2020, with the volume ramping back up as the spring 2021 semester approaches.

“As gratifying as it always was to see our work in print every single week—and there’s something a bit old-fashioned about that, and seeing people walking around with physical copies on campus—an unexpected silver lining was that with digital, we were able to give writers the freedom to really cover their stories without space constraints,” shares Hollander. “Our arts and culture editor, Katie Frost ’22, also did a fantastic job pushing stories out on social media and directing people to our website to read them.”

LaFarm Grows a Community During Pandemic

Digging out rocks, hauling in rich topsoil, planting, weeding, harvesting, and making friends—these are all activities that can be done in community gardens, at social distance, and in the open air.

At Lafayette’s LaFarm, which is located at the Metzgar Fields Athletic Complex and provides multidisciplinary student engagement through classroom participation and academic research, no virus could put a damper on the daily list of to-dos. LaFarm, after all, also harvests food for the local community, which became increasingly important as 2020 continued on.

Lisa Miskelly, assistant director of food and farm, worked to ensure that all students who were hands-on in the gardens were adhering to COVID-19 regulations while still gaining a rich experience. 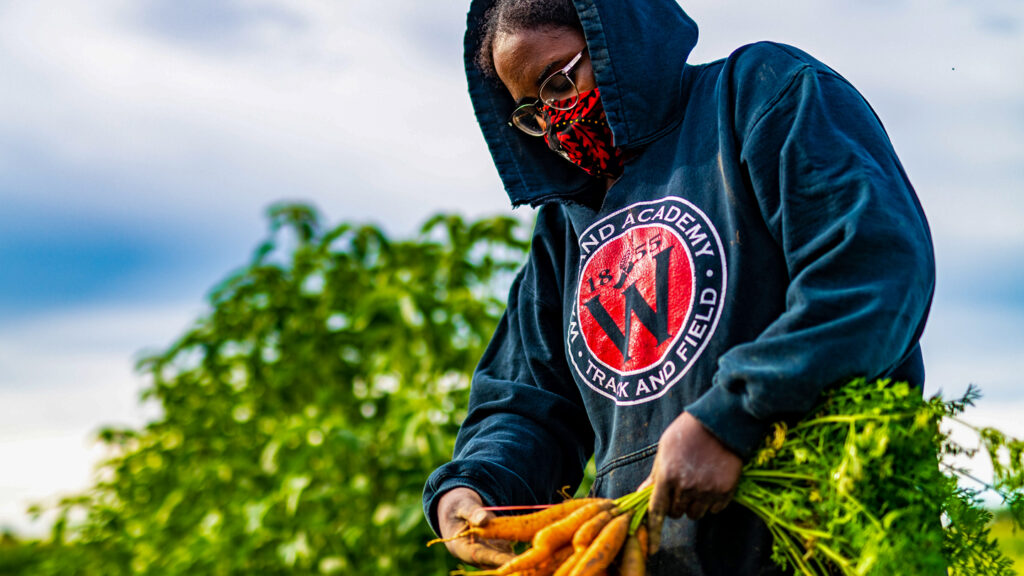 “Lisa took many measures to ensure we farmed safely to protect each other and those whose food we were harvesting. We always washed our hands before harvesting or whenever we switched tasks on the farm to keep things clean. We also were all required to wear masks on the farm unless we were getting a drink of water,” shares Teniola Bakare ’23. “Even during the summer session, we all wore masks, and if it was ever too hot, we had the option to work on a task far away from everyone so that we could have a breather. The farm workday was relatively the same as that of pre-COVID; we just took more steps to ensure that everything was clean and safe for the people who would eat it.”

“It was incredibly fulfilling and a wonderful privilege to work at LaFarm, which offered a consistent space of support and purpose on days when I needed it most. It was most valuable for me to be able to step outside of myself, see others, and physically work together with them to plant, weed, grow, and harvest food that we could contribute to both the Lafayette and Easton community,” says Addie King ’21. “I also have become so appreciative of the space for open dialogue that Lisa has created. LaFarm has been a space to listen to others’ experiences and again step outside of myself. While the food that LaFarm provides is certainly the most tangible output of its land and our labor, I believe its identity as a space of safety and growth for the Lafayette, Easton, and Forks communities is truly invaluable.”

For those who miss the rush of sitting among strangers and waiting for the lights to go down, both the Department of Music and Department of Theater made great strides in bringing their performances to a virtual space while navigating their musicians and actors being all over the world.

Lafayette’s Percussion Ensemble presented a group performance of Steve Reich’s minimalist composition, “Clapping Music,” which required students to study the parts in group rehearsals, then record themselves individually. Each solo performance was synched together by Jordan Leiber ’22. Under the direction of Larry Stockton, professor of music, the group also presented a series of virtual performances that included Strawberry Djam, an original signature piece for the ensemble, and a number of small group original creations. Performances can be found on YouTube. 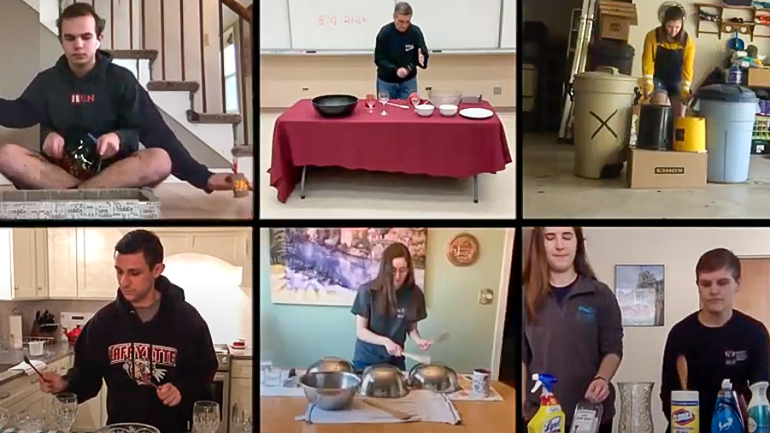 A mashup of improvised percussion pieces performed by Professor Larry Stockton and his students using objects in their homes.

Similarly, Jennifer Kelly, associate professor of music, director of choral activities, and director of the arts, and Kirk O’Riordan, associate professor of music and director of bands, set out during the fall semester to build togetherness among their groups and make music. Under O’Riordan’s guidance, the Lafayette Concert Band performed three virtual pieces that were wildly different in style. The performances were created in the studio as students recorded their parts on their phones or computers and sent them to O’Riordan, who edited them together and processed them into one full recording. In contrast, Kelly and the choir and Chamber Singers used an open source application called BandLab, where they recorded their parts via their computer or phone. They then would listen as the various pieces were stitched together.

Lafayette’s Department of Theater presented a season of live streaming performances, radio broadcasts, special events, and Zoom meetings with guest speakers and theater alumni. Aptly titled “Up Close and Distanced,” the season included “The Summoning of Everyman,” “Behind the Masks” (original monologues and short scenes in response to coping with the pandemic), “Emma: A Pop Musical,” a radio broadcast of “You Are There: Native Americans at the First Thanksgiving,” and a radio broadcast of “The Man Who Came to Dinner.” Spring performances include the Chinese folk epic “Monkey” and “The Country Wife,” either performed in the Weiss Theater or streamed live.

The Lafayette Pard Pantry, an initiative that the Office of Religious and Spiritual Life collaborated on with Student Government students to provide perishable and material goods to on-campus scholars during the time of remote learning, had over 100 donors in 2020—many of them repeat donors throughout the year. 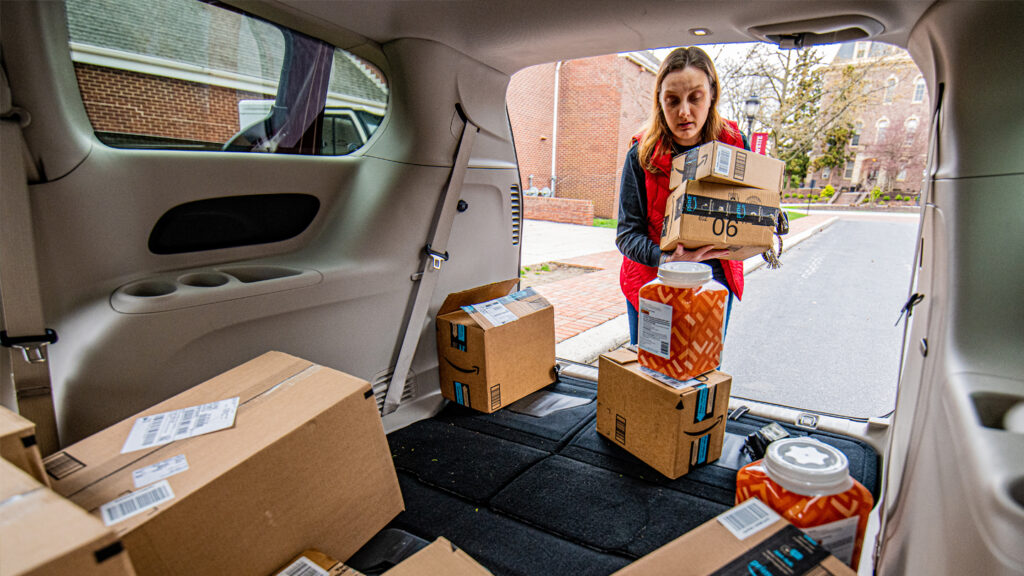 “Faculty, staff, students, parents of students, alums, and community members have all contributed. An average of 60 or so students have accessed the pantry each week since March,” says pantry organizer d, director of religious and spiritual life.

Not only does the pantry provide nourishment for students who need access to food, but it also provides consumables such as shampoo, toothpaste, soap, and other necessary hygiene products. Because these products are quickly utilized, ongoing donations are always necessary.

“Until we are up and running with on-campus jobs available for all students who need them, we are still needing both financial and in-kind ongoing donations,” says Hendrickson.

If you are able to donate to the pantry, you may contact Rev. Hendrickson at hendrica@lafayette.edu. There is an Amazon Wish List set up; visit amazon.com/wishlist and search “Lafayette On-Campus Students” to find the list. You also may donate at appropriate on-campus donation box sites located at Farinon, Simon Center, Acopian, and Kirby Hall of Civil Rights.

Experiential Learning in a Pandemic

The Gateway Career Center faced the challenge of how to replicate two signature experiential learning programs, the Externship program and Career Tracks program, which traditionally are conducted in person, during the extended winter break.

The externship program pivoted to the Explore & Connect program, a virtual 2-3 hour exploration and networking opportunity created to connect students with an alum, parent or friend of Lafayette. While there was the question of whether there would be interest in virtual externships, over 350 students were matched with 130 unique hosts.

The Career Track program also went virtual this year.  Normally, students would travel to major cities like Boston and NYC to visit employers representing a particular industry “track” like finance, media and communications, and innovation and technology.

“[We faced the same question of whether there would be interest on the employer side and student side, and the answer was ‘yes.’  In fact, we even expanded the cities we would visit to include Washington, D.C. and the west coast,” says Mike Summers, assistant vice president of the Gateway Career Center. “In all, we had 9 tracks and over 130 unique students participated.  We also engaged with several new alumni, parents and friends as hosts for our students.”

Another benefit of going virtual was the access afforded to students who may not have participated otherwise due to barriers such as expense, geographic location, time, and logistics. In fact, several students were able to participate in more than one experience since space restrictions were not a factor in this virtual environment.Early feedback on both programs from the hosts and students is that both programs exceeded expectations.

The question the Career Center faces now is how to take the best parts of the virtual experience and integrate them into programming for next year.

“This is another challenge we will take and turn into opportunities,” says Summers.