A beautiful, raw energy lures Dr. Jeff Wasserman ’86 in the hunt for tornadoes 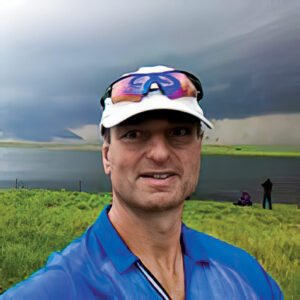 A pioneer in several novel interventional spine therapies, Wasserman, who’s been practicing medicine in Dallas, Texas, since 1995, performs spine and joint injections, and implants opioid pumps and spinal column devices, such as neurostimulators, in patients with cancer, nerve damage, and musculoskeletal disorders.

But when tornado season starts to heat up every spring and blinding hail and rain-packed supercell thunderstorms start morphing into dangerous rotating updrafts, he turns to the other side of his scientific persona and examines and tracks the anatomy of tornadoes. 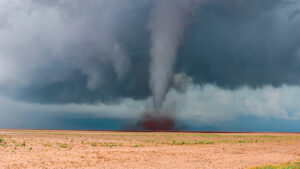 Wasserman captured this image of a tornado in Big Springs, Texas.

More than a thrill-seeking hobby, his meteorological alter ego, much like his practice of medicine, also helps humanity. By providing critical information in real time to alert authorities and inform weather services as the freight train roar of a tornado approaches, Wasserman helps keep people safe from one of nature’s most furious and destructive weather systems.

When May warmth starts priming the atmosphere, he looks north up Interstate 35 from Texas and into the Great Plains Tornado Alley, where he spends two to three weeks each year, often traveling solo several hundred miles a day in a rented SUV, tracking, photographing, and studying tornadoes. 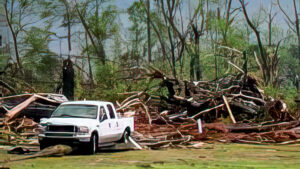 Even in winter, tornadoes can develop.

During a Zoom chat with Wasserman in early January, he was keeping an eye on glowing radar images indicating a severe line of thunderstorms in the Houston area. He searched for the classic hook signature that often indicates favorable conditions for tornado formation.

It was just the right moment to get him talking about his fascination with tornadoes and why he puts himself at risk in pursuit of them.

What lures you to tornadoes?

Once I got down here to Texas, I really started to get into meteorology. I started to see these storms. I was like, these are beautiful, just raw energy from nature. It’s simply stunning, to see them forming and spinning out there.

What brought about the transformation from an interest to a vocation?

Living in the southern plains and Tornado Alley, the scientist in me became fascinated by the spring thunderstorms and tornadic supercells that frequently occur in the region. The combination of warm moist Gulf of Mexico air to the south, desert dry air to the west, and cold Canadian air masses aloft dipping down over the Rocky Mountains creates unique weather conditions over the plains that favor supercell development.

I went on my first tornado chase tour in 2004 and was immediately hooked. I trained as a storm spotter for the National Weather Service and, after several years of classes, obtained a Certificate in Weather Forecasting from Penn State.

I spend several weeks each spring storm chasing throughout the plains. To date, I have witnessed well over 100 tornadoes, ranging in strength from minor EF-0s to catastrophic EF-4s. I’m fortunate that my wife, who grew up in Kansas and is accustomed to severe weather, is supportive of my somewhat risky and time-consuming hobby, and will occasionally accompany me on a chase.

What’s involved in a tornado chase?

When a severe weather event is anticipated, I forecast and will try to narrow the daily chase region based upon high atmospheric moisture, instability (cold air aloft with warm moist air near the surface), air mass convergence such as warm fronts, and optimal wind shear.

Usually severe weather develops late afternoon to early evening, which permits for several hours of storm chasing on a typical day. My usual gear consists of mobile internet with high-resolution radar software, backup low-resolution satellite radar for chasing in areas where wireless data is not accessible, road atlas software, and plenty of photography equipment, including a DJI Mavic drone. My pictures and videos have been featured on the Weather Channel, Storm Stories, and various news programs that covered tornado outbreaks.

Do you ride around in one of those tank-like armored chase trucks?

No, that’s pretty much a TV gimmick, since those vehicles are usually slow and require excessive maintenance. Most chasers will just use a beat-up old car or rent a small SUV and load it up with all the mobile equipment just described.

Have your medical skills ever come in handy during a chase?

Yes, while chasing I’ve come across destroyed towns with mass casualties and car accidents with injuries. If I see injuries, I always get out and help out, as it would be unethical not to do that, but safety is paramount. First and foremost, I really try to chase safely. Yes, I will get out and can respond with first aid if someone’s hurt. But you don’t just pull over in the middle of traffic and cause an accident or get in the way of first responders.

I treat the injured, if I come up to an accident. And you do see a lot of car accidents especially during heavy rain and hail. A lot of times I come up to car accidents when I chase, and I usually get out and help because I used to be a paramedic, so I can truly assist the first responders at the scene and not just get in the way. I trained as an emergency medical technician during high school in New Jersey, rode as a member of Easton Emergency Squad during my time at Lafayette, rode as a medic with Hershey Fire Department, and flew as a flight medic with Penn State’s Life Lion helicopter.

Was there ever a time when you asked yourself, hmm, maybe tornado chasing isn’t such a good idea?

Oh, every time [laughing]. I was chasing with my brother-in-law in Kansas one night, and we lost internet connectivity after sunset. A tornado that we couldn’t see came right at us south of Wichita, and we ended up inside of it. We considered abandoning our vehicle and taking cover in a ditch off the Kansas Turnpike, but held tight while the truck rocked in the high winds. After that, I decided to never chase after sundown and added a satellite system to my equipment set so that I always have backup radar even in the middle of nowhere.

What’s it like to be inside a tornado? It’s something you don’t think about, unless you’re watching The Wizard of Oz.

You know, these tornadoes, the large multi-vortex tornadoes, are pretty wide. They’re like 1/4 mile to 2 miles wide with speeds up to 300 mph. If you’re just on the very outskirts of it, you’ll get blown around, and you’ll feel the low pressure and your ears will pop, but you’ll likely be OK. Don’t get me wrong, that would be poor form to end up inside the actual cyclone, but any experienced chaser will tell you that a few times they got ‘too close.’

I’ve been in them before, because sometimes you’re a prisoner of the road system and can’t escape. It’s frightening, with debris just spinning around. But, in most cases, you can predict where it’s going to go and maintain a safe position. You know, 99 times out of 100 everything goes the way you planned, but that one time in 100 will get your adrenaline really pumping.

Have you ever considered chasing hurricanes too?

Hurricanes are 1,000 times more destructive than tornadoes due to their size, duration, and storm surge flooding. But you know where the damn thing is going to hit, you know it’s coming. That takes the fascination out of it for me. I like forecasting. I like the hunt. So there’s no thrill. Plus, you end up going someplace where you’re going to be stuck for three or four days due to flooding and power outage. That just doesn’t appeal to me.

Looking back, how did Lafayette prepare you for medicine and tornadoes?

The love of science was built inside me and certainly started while I was in Lafayette. My classes at Lafayette and many mentors, especially in the Biology Department, helped prepare me for the rigors of medical school.

I consider myself a scientist. I think every doctor does. We read studies and understand scientific concepts, and I think spreading into meteorology was very natural for me. Tornado forecasting is amazingly challenging, and you need to know every aspect of meteorology to do it. And like medicine, forecasting saves lives.