Pizza may very well represent the foundation of the collegiate food pyramid.

But that insatiable desire for pizza results in stacks of grease—and cheese-stained cardboard boxes that are almost impossible to recycle. The appetite for pizza at Lafayette College alone results in roughly 10 tons of boxes a year from Gilbert’s Café and Simon’s Deli that end up in conventional waste streams.

Made of corrugated cardboard, a pizza box, once soaked with oil and fat from toppings like pepperoni, cannot be broken down as the paper fibers lose their ability to separate.

But a senior capstone project in the Department of Civil and Environmental Engineering that showed promise but was cut short when the pandemic closed campus began exploring ways to incorporate pizza boxes into the College’s composting program, diverting them from landfills and eliminating a contaminated paper product from recycling operations.

We struggle as a nation to do recycling in an appropriate way.

“The class was charged with coming up with a cooperative program for composting, which would combine the efforts of Easton and Lafayette College and that ties into the Climate Action Plan,” Kney says. “One of the ideas was to bring pizza boxes into the mix because they can’t be recycled, resulting in an incredible amount of material headed for the landfill.

“We struggle as a nation to do recycling in an appropriate way,” he adds. “Food waste isn’t going to get any easier to manage. Composting pizza boxes is a step in the right direction, a creative way to divert recyclable and compostable waste from landfills.”

Pizza box composting is one initiative to help advance the College’s goal of diverting 60% of landfill waste by 2035.

“Pizza boxes are a tricky item in our waste stream because they are cardboard, which is recyclable on campus. But it’s usually stained with pizza grease and food waste, which contaminates our recycling,” says Kendall Roberson, sustainability fellow in the Office of Sustainability. “Composting the pizza boxes is a unique solution that may be able to help reduce contamination in our waste streams and allow students to compost an item that otherwise is usually trash.” 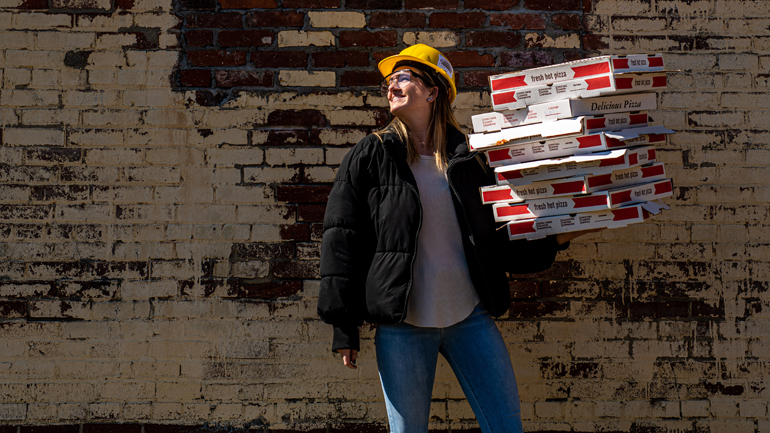 To pilot the program, Lafayette collaborated with the Greater Easton Development Partnership and the City of Easton, which offered one of its industrial wood chippers to shred the boxes.

On a bright February day, before the campus closed in response to the pandemic, Kney, Malladi, and students gathered in the parking lot at the Facilities Operations building on Bushkill Drive with stacks of pizza boxes to test their idea.

With a few smiles and quizzical expressions, the city’s Public Works employees who operate the shredder expressed varying degrees of skepticism that the chipper would do the job.

Fed into the machine by city employees, the first pizza box was reduced to compostable paper pieces in a matter of seconds. Everyone cheered.

“So you can put a whole pizza box into the compost pile, and it will take probably 10 times as long to break down as if I were to shred it into small pieces,” says Kney, noting that the city’s chipper, at least for now, is key to the program’s success.

Zack Capolongo ’20 (civil engineering) hopes the program will take root and spread to other colleges and schools.

“Pizza boxes have to go somewhere; this is a beneficial way to keep them out of landfills,” he says. “Until now, I didn’t know it was even possible to compost a pizza box.”

Emily Rabens ’20 (civil engineering) may never again look at an empty pizza box as just a piece of trash that gets tossed in the garbage. “When I see a pizza box now, I think of compost,” she says.

Pizza box composting is a new and innovative solution that very few schools and programs have accomplished, says Philip Brown ’20 (civil engineering). “Once implemented, this program can put Lafayette at the forefront of sustainable solutions across the country,” he says.

There are still areas to study, including how to address the potential of toxic inks and plastic on the boxes themselves and whether prolonged use of the fossil fuel-powered chipper may create more of a detrimental environmental impact than the composting achieves, Malladi says.

Shredded pizza boxes provide an additional source of brown matter such as leaves, sawdust, and straw, creating airflow and a source of carbon in a compost pile. Any leftover microorganism-inviting particles of food or grease will aid the composting process.

Longer-term plans would involve using large cardboard collection boxes in various buildings with educational posters to inform students and faculty about the project and how it works. Collection boxes would be placed next to the garbage/recycling bins for easy access and in buildings with the most guest speakers/scheduled events that require large orders of pizza to collect the most amount of pizza boxes possible. 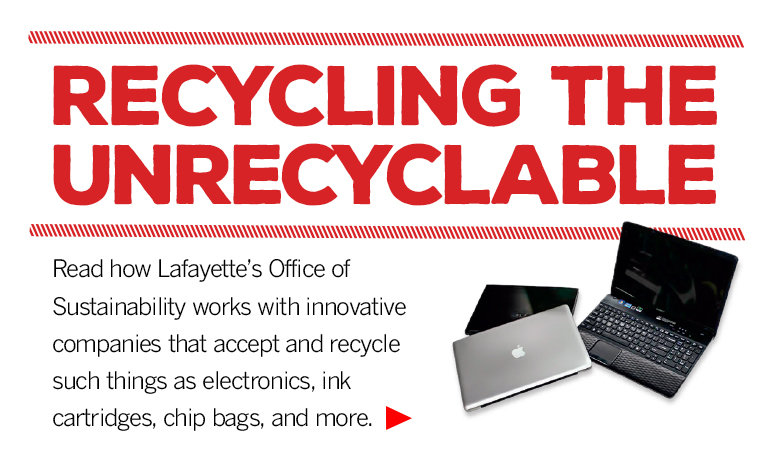 Pizza boxes would be stored in a small shed at the composting site until they are shredded into small pieces with the city’s wood chipper.

As director of Landis Center for Community Engagement, Kney envisions one day collaborating with Easton’s schools in a wider pizza box composting campaign, perhaps with designated drop-off areas. For Easton, the food waste that is composted would come back to the community members, farms, and gardens, he says.

In May, Kney applied to the Environmental Research & Education Foundation to request funding to test the effectiveness of composting pizza boxes and establish a cooperatively managed academic/municipal composting operation.

“There are lots of great pieces here from the community connection side,” he says. “This opportunity to compost pizza boxes presents both a unique and innovative solution to handling a large-scale waste problem that is not commonly found at
other schools.”