Thanks to Bergh Summer Accelerator (BSA), two student-led teams turned summer into a strategic investment. BSA is a new program of Bradbury Dyer III, ’64 Center for Innovation and Entrepreneurship. Thanks to a recent gift from Chip Bergh ’79, president and CEO of Levi Strauss & Co., BSA teams received mentoring, training, and financial support (up to $20,000 per team) over a 10-week period.

Run by four students, CherryTree gives small farmers the ability to market themselves to nearby consumers and sell their products online. Users can make purchases of fresh and local produce, meat, dairy, and more through the online platform and pick it up directly from farms, markets, and farm stands in their community.

This summer, CherryTree rebuilt nearly every aspect of its platform, focusing on a scheduling system that allows farmers to position products at multiple markets at once. The students hired coders, signed contracts, and developed software to move the business forward. Tye Gonser ’02, attorney partner at Weinberg Gonser LLP, served as a sounding board, while Jared Mast ’04, executive director of Greater Easton Development Partnership, talked with the students about the local market.

The other team, GoPeer, pairs qualified college students with K-12 students for one-to-one tutoring lessons. Through BSA, GoPeer built an online platform this summer to augment face-to-face tutoring. The company also adjusted its tutor hiring by investing more in fewer tutors in hopes of better managing, supporting, and retaining them. A key accomplishment was closing on a $265,000 seed round of funding from high-profile investors. And Sharon DiFelice, director of innovation and consumer insights at Crayola, helped the students better understand their business model and successes and challenges.

Political analyst, journalist, and bestselling author Fareed Zakaria addressed a packed Colton Chapel Oct. 3, sharing
his insights on the rise of populism, the value of a liberal arts education, and the need for more compromise both in and out of politics. 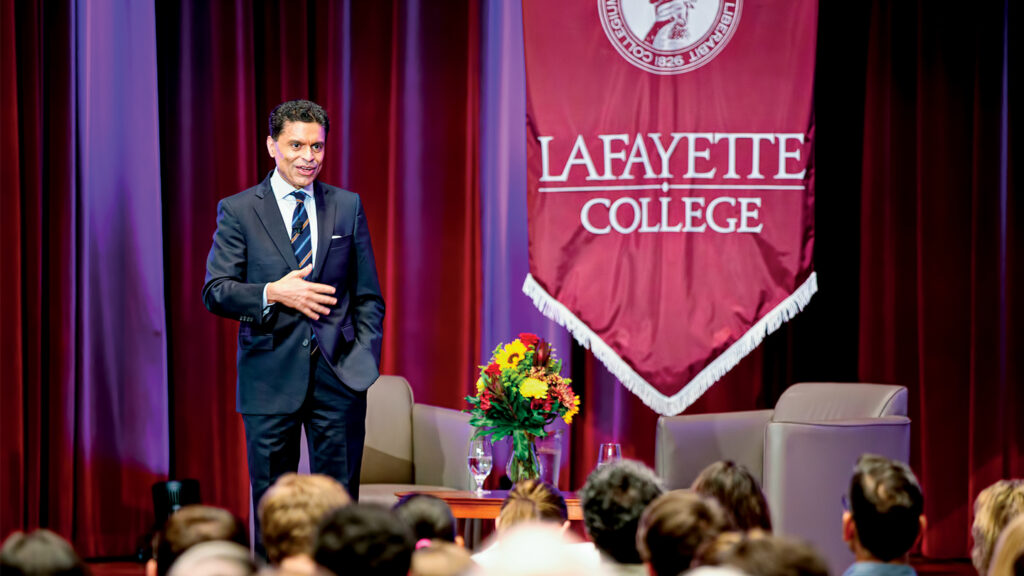 Zakaria, host of Fareed Zakaria GPS for CNN Worldwide, columnist for The Washington Post, and contributing editor for The Atlantic, was invited to campus by the International Affairs (IA) Program to commemorate its 60th anniversary as a major at Lafayette. The lecture was followed by a question-and-answer session led by Angelika von Wahl, associate professor and program chair.

In his talk, Zakaria provided analysis of why more governments and people over the last decade have supported populist agendas. Despite division and discord in the political climate, Zakaria embedded messages of hope and humor in his presentation. Addressing students in the audience, he said, “You have a huge job ahead of you; don’t screw it up.”

Prior to his evening lecture, Zakaria engaged in a Q&A session with 21 students, most of them IA majors. Students asked Zakaria to comment on the presidential impeachment investigation, immigration policies, 2020 election, conflict in Kashmir, and power of social media. Zakaria praised students for their “intimidatingly intelligent” questions.

Christian Combi’s first visit to Lafayette was in utero to watch—well, maybe feel—the Leopards beat Navy 87-61 to win the Patriot League men’s basketball championship and earn a berth in the NCAA Tournament.

“It was loud. Everyone was banging on the bleachers,” recalls his mother, Cynthia ’90. “I remember thinking, ‘I hope this is OK for the baby.’”

A few years later, Christian was back on campus as a “quaddler,” the label Lafayette students bestow on the daycare toddlers who walk the Quad with their teachers, two by two, hand in hand.

This fall, Combi is on campus as a member of the Class of 2023 and recipient of the inaugural Lafayette–Easton Scholarship, to be awarded annually to a graduating senior at Easton High School.

“The name Lafayette is all over our house: banners, comforters, chairs,” says Christian’s father, Mark ’86. “We may have unintentionally brainwashed him at an early age about going to Lafayette.”

“I wanted the best academic fit, and this just feels like home to me,” Christian says. 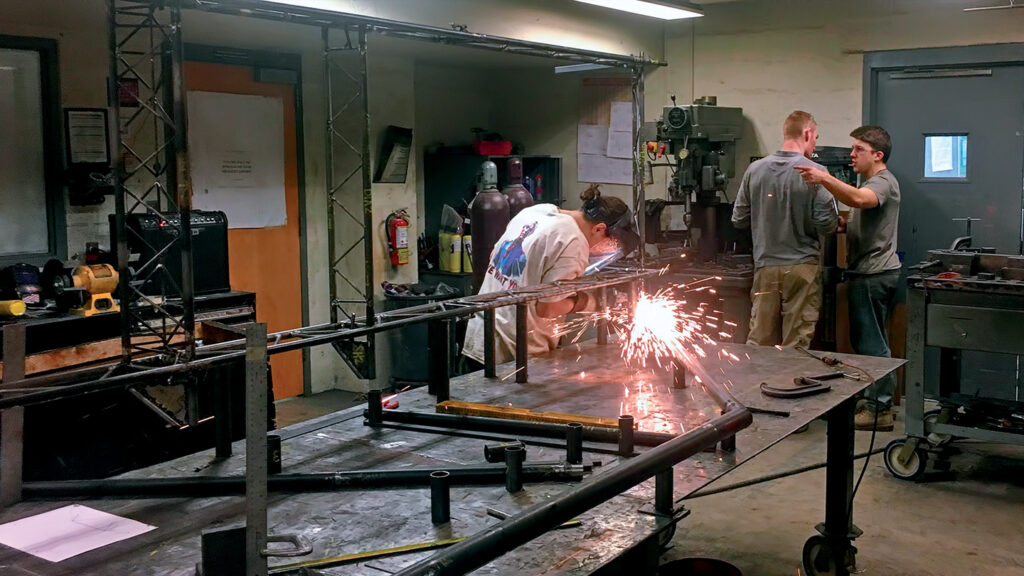 “Back-to-back national championships is certainly great,” says Steve Kurtz, team adviser and associate professor of civil and environmental engineering. “But the best part—for me, at least—is seeing education in action. As a team, our perspective is that this project teaches the art/science of engineering decision-making; every decision must be an engineered decision, backed by data, analysis, and argument. This process led to design choices that were quite unlike any other design. This team never stopped questioning, arguing, and analyzing—and it showed.”

Diversity and Inclusivity in Engineering 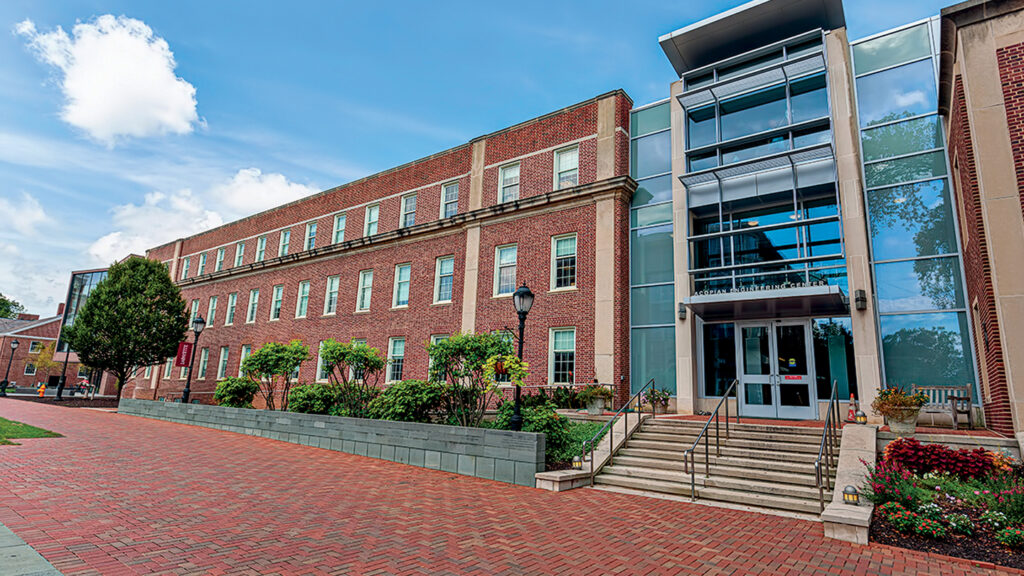 Lafayette has been recognized by the American Society for Engineering Education for its commitment to diversity and inclusivity. Lafayette’s engineering programs consist of 36% women students and nearly 25% from underrepresented groups, approximately double the national average. Lafayette is among the top 20 schools in percentage of bachelor degrees awarded to women and ninth among all engineering colleges and universities in percentage of women tenured/tenure-track faculty.

Highlights of Lafayette’s recent diversity and inclusion activities include Hidden Figures Week in November 2018, which featured a keynote address by Margot Lee Shetterly, author of Hidden Figures, and the inaugural Women in STEM Week in April 2019. Both programs featured panel discussions, lectures, and lunch talks exploring issues related to underrepresented groups and women in science, technology, engineering, and math. The College also established the Kate and Walter Scott Endowed Faculty Chair, a position responsible for mentoring diverse students, including the Minority Scientists and Engineers chapter. In addition, the College recently introduced a first-generation outreach/mentoring program to connect first-generation and low-income students from underrepresented backgrounds with mentors on campus.

Rockwell by the Numbers

The Newest Addition to the Lafayette Campus