Barry Sleckman ’83 working on research
in lab of Joseph Sherma, professor
emeritus of chemistry, in 1982.

In spring 1980, Joseph Sherma met a stranger with a strange story. Sitting in his Olin Hall office, the chemistry professor listened as an incoming part-time student declared his ambition to become a full-time student and a surgeon despite a poor research background and poorer grades.

Sherma doubted his visitor could fulfill his quest. Yet he admired the young man’s sincere tenacity. Perhaps, he thought, a onetime aspiring pro golfer and state trooper might just have the drive to graduate from Lafayette and perform surgery.

His strange visitor, Barry Sleckman ’83, became an exceptional student and research partner, an award-winning professor and a ground-breaking immunologist, a compassionate scientist and a classic mentor. He is a role model in the mold of his own role model, the late Fred Rosen ’51, a pioneering pediatric immunologist who once bought a home for a medical-school student who was also his patient. It takes a village to educate a single student; it took a college community to give Sleckman a mission. “The people at Lafayette gave me a break,” says the chief of laboratory and genomic medicine at the Washington University School of Medicine in St. Louis. “I can think of few people in my life who were so generous, so loyal. That whole experience changed my life, fortuitously.”

One of Sleckman’s significant discoveries is a unique pathway that responds to damaged DNA in a way that regulates the development of immune cells. His Washington University lab is a center for the study of how immune cells break and repair DNA strands — some 70 million per hour in the bone marrow of an average 35-year-old. Resplicing genetic materials allows lymphocytes to protect the body from millions of potential invaders. If even one in the 70 million breaks per hour is not repaired properly, however, these cells can form cancers known as leukemia or lymphoma. 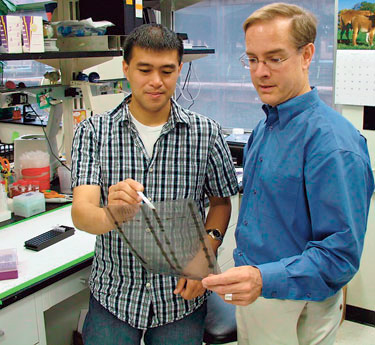 Assisted by his lab students, Sleckman has significantly broadened knowledge of DNA breaks. In a 2008 paper published in Nature, he described how DNA breaks activate genes that cause lymphocytes to travel from the bone marrow, where they’re produced, to other infection-fighting areas. In a 2011 Naturearticle, he revealed a distinct pathway that handles only the rare DNA breaks that don’t get repaired. He identified a protein in the pathway that preserves the structural integrity of broken DNA ends, preventing these ends from accessing aberrant repair pathways that promote genomic instability leading to cancer.

As a teenager in Summit, N.J., Sleckman turned the basement into a shop to repair golf clubs and pursued a dream of playing golf professionally while his grades plummeted. He graduated in 1978 in the bottom quarter of his class and enrolled in Farleigh Dickinson University as a marketing major. That fall he accompanied a nervous friend to the latter’s civil-service exam for New Jersey state troopers. In order to stay with his friend, Sleckman had to take the test, too.

He passed and in January 1979 entered the 95th class of New Jersey State Police Academy. He left in April 1979 with a new appreciation for paramedics. He returned to FDU as a business major, determined, he says, to transfer to a “better school.” He sold his golf-club repair business, volunteered at a hospital emergency room, took EMT and biology courses. He decided he wanted to be a surgeon and began devouring biology and chemistry books from his high-school library and taking self-made exams.

Sleckman investigated the biology/pre-med program at Lafayette, the alma mater of two relatives. A College admissions officer told him what he suspected: his grades and SATs were too low for acceptance as a full-time transfer student. His only option was taking a general chemistry class as a part-timer. Around this time Sleckman knocked on the door of Sherma, an avid golfer who knew a New Jersey golf pro who knew Sleckman. “I didn’t have any great expectations for him,” Sherma says. “But he was so sincere, and he wanted to succeed so badly, you just had to have hope.”

Sherma sent Sleckman to Robert Chase, head of the biology department and former dean of studies. Impressed, like Sherma, by Sleckman’s determination, Chase allowed him to audit general biology. Sleckman did so well that Chase turned the audit into credits and convinced the admissions office and registrar to accept Sleckman as a full-time student for the spring 1981 semester.

Sleckman was nurtured by Sherma and biology professor Bernard Fried, Sherma’s frequent research partner. Working with Fried and Sherma in summer 1981, Sleckman began to think less seriously about a career in surgery and more about a career in research.

“Before I met Joe and Bernie, I thought: Yeah, research — that’s something you put on your resume to get into medical school,” says Sleckman. “That’s how naive I was. Joe really loved figuring out things that were unknown, and that turned me on. Bernie, too.”

Sleckman ended up co-authoring six papers with Sherma, who joined the faculty in 1958 and retired in 2001. “Barry was just amazing,” says Sherma, who has collaborated on more than 100 papers with Lafayette undergrads and/or Fried, who came to Lafayette in 1963 and retired a year before Sherma. “He seemed to be in the laboratory all the time. I don’t know when he slept, frankly.” Sleckman graduated with a GPA of 3.98.

Sleckman was accepted into the Harvard-MIT Health, Science, and Technology M.D. program and decided to specialize in immunology. The clincher was a first-year course taught by Emil Unanue, a prominent researcher who made the study of immunology almost infectious. “Emil was passionate,” Sleckman says. “He fueled my desire.”

Sleckman also met mentor Rosen. A renowned pediatric immunologist at Harvard and Boston’s Children’s Hospital, Rosen was fabled for identifying genetic abnormalities in kids, developing life-saving treatments, and treating young patients as if they were his own children. A lifelong bachelor, he was particularly close to two brothers with a blood disorder called agammaglobulinemia. He helped one get into Wash U. Med School, where Rosen guest-taught the immunology course (and visited immunodefi ciency patients at St. Louis Children’s Hospital). Then he bought a condominium for his patient-protégé.

“Fred didn’t want the young man living in a dorm — that’s how concerned he was about him,” says Sleckman of Rosen, who died in 2005, a day after scores of colleagues from around the world held a symposium in Boston in his honor. “He was an incredibly astute clinician who was also incredibly warm. You know, Fred is the one you should be writing about.”

It was Rosen, in fact, who guided Sleckman to his first faculty position. In 1998 Rosen urged Sleckman to send his résumé to Unanue, who had left Harvard in 1985 to chair the pathology and immunology department at Wash U. Med School. Unanue hired Sleckman to start his independent research lab, completing a third-generation Lafayette-Washington connection. Unanue’s son, David Unanue ’92, was steered to Easton by none other than Rosen.

A dozen years later, Sleckman runs his classes and labs in the best Rosen tradition. Rosen humanized lectures by showing slides of his protégé-patient at ages 7, 18, and 35. It was his way of improving his students’ bedside manners. Sleckman ends his classes by asking his students why they should care about a particular disease. It’s his way of encouraging them to be not only watchful but careful.

Sleckman’s medical students have voted him professor of the year six times. He impresses visiting students, too. In summer 2004 Sleckman hosted Ryan Evans ’05, a biochemistry major sent to him by Sherma and Fried. “We had taught Ryan a lot, but we knew Barry could teach him more,” says Sherma, who in 1982 sent Sleckman to a colleague at Penn’s medical school for the same reason.

Evans lived in Sleckman’s basement until he received a fellowship that enabled him to afford a dorm room. He worked in Sleckman’s lab, co-authored a paper with him, watched a St. Louis Cardinals game in a Sleckman seat. “Some advisers are somewhat cold and distant; they feel they have to push and punish,” says Evans, who recently received a doctorate in biological chemistry. “Barry energizes people through his energy, his vast scientific knowledge, his incredible pace. With Barry, the lab is his family.”

Sleckman’s lab has made discoveries that strengthen his seven-year project with National Institutes of Health to explore and expand the roles of DNA repair pathways. The information is especially important for immunologists in Lafayette’s health and life sciences initiative, a collective of some 60 faculty members representing 15 departments. For example, Yvonne Gindt, associate professor of chemistry, studies the recognition mechanism of DNA repair. Robert Kurt, an associate professor of biology who was recently named the first Peter C.S. d’Aubermont, M.D. ’73 Director of Health and Life Sciences, studies how cancer avoids the immune system. In 2009 the NIH/National Cancer Institute awarded him a threeyear, $190,000 grant to research new methods for the body to battle cancer by detecting disease. A second grant of $273,271 was received in 2012. Sleckman is scheduled to lecture to Kurt’s students this fall.

Sleckman has been honoring his Lafayette mentors for years. In 1995 he introduced Sherma when the latter received the American Chemical Society’s annual award for stewarding undergraduate researchers. Every time he tells students to review their plan to be researchers, he remembers Sherma’s blunt advice to him. “I tell them you have to be committed to climb a tall mountain.”

“Fred considered what he did a privilege,” says Sleckman. “He loved taking care of his patients throughout their lives. He loved educating people about pediatric genetic disorders. He loved convincing his rich friends to donate money to help children afflicted with immunodeficiencies. That’s why I remind my students that they all have the option of working at something they enjoy and that they have a responsibility to make their profession better, whether it’s through improving patient care, furthering understanding of diseases through basic research, or driving important health-related public policy. They should pay back for the fact that they will never have to work just for a living.”

“ My EXCEL Scholars program mentor, Ed Kerns, Clapp Professor of Arts and Humanities, taught me technique and helped me learn to trust my own ability…

By Jay Parini ’70 I often think back to my days at Lafayette, in the late sixties. It was a heady period, of course, with the Beatles and Vietnam. There…