With a team of Lafayette alums, Chris DiMarco ’98 is helping those who live paycheck to paycheck reclaim financial health. In the process, he’s built the fifth fastest-growing private company in the country

Welcome to Perpay. It’s time for the Monday morning team meeting inside the Center City office. A few dozen young professionals squeeze onto and around soft couches in a glass conference room at the epicenter of the office, waiting for the company’s chief technology officer to finish his cappuccino, or espresso, or whatever he’s busy with over at the coffee bar. His curious whippet named Kingsli (not the only dog at Perpay, but certainly the one around the most) wanders into the room, but is gently shooed out.

The dress code is comfort—at least five employees biked here—and Perpay founder and CEO Chris DiMarco ’98 is wearing his usual: jeans, dress shirt, Patagonia vest. Natural light streams in through the eighth-floor windows and across the open floor plan. Someone has scribbled notes with a black dry-erase marker on the center room’s glass walls. By description, and by definition, this is home to a startup.

A huge blue architect lamp is just one of the interesting lighting choices that make up Perpay’s hip office décor. It’s also a nod to DiMarco’s other company, e-commerce retailer Lamps.com, which he founded a decade ago with the help of childhood friends Anthony Balsamo and David Hayne, after purchasing the URL from Step Sinatra ’98. (DiMarco is still on the board of Lamps.com, but stepped down from his CEO post in 2015 to focus on Perpay.)

The weekly gathering starts like it always does—team members share, clockwise, what they did over the weekend. It’s what you would expect from a group of 20-somethings: Netflix. Naps. Live music. Pizza. One team member, Fiona, hosted her engagement party at the office.

After the weekend recap, there’s a very brief analytics report, read from an iPhone, about the previous week’s metrics. It’s early November, but Perpay’s online shopping for the holidays has already begun. And numbers look good.

DiMarco seems pleased. There is much to be happy about. Last August, Inc. Magazine named Perpay the fifth fastest-growing private company in the country—and No. 1 in the retail category. The ranking reported the company’s 2018 revenue at $22.5 million with a three-year growth rate of more than 18,000%. Perpay went on to double its revenue again in 2019. To date, Perpay has served more than 50,000 customers, two-thirds of whom are repeat shoppers.

Growth has been so quick, in fact, that the company only has a few months left in this office. It’ll be moving in July to a space that’s three times the size in Philadelphia’s new Aramark building on the banks of the Schuylkill River.

The location is a little closer to DiMarco’s Rittenhouse home, where he lives with his wife, Brooke Mayer ’00, and their two kids, Christian and Emilia. But the move is about needing the room: Rob King ’17, business development lead and head of recruitment, hopes to add more than 20 new hires in 2020.

“It’s been neat to see teams and departments emerge from the ground up,” says King, who already is in a leadership role. “The amount of trust that Chris has in his employees, especially at a young age, is super refreshing.”

“The working population in our country is roughly split in half—bankable and not bankable. Put another way, prime and subprime,” says DiMarco. “Fifty percent of the population has limited access to affordable credit.”

Which is a problem, especially when life’s unexpected expenses pop up—from broken dishwashers to worn-out car tires to the stress of holiday shopping.

So Perpay’s business model assesses creditworthiness based on net income and easy scheduled payments in place of one’s historical credit score. This approach to risk assessment, in combination with a unique payment mechanism, yields a more creditworthy consumer (see sidebar for how it works).

Its Amazon-style marketplace, which has 500 brands from KitchenAid to Nintendo, is based on needs and wants. Goodyear tires, for example, run just $17 per paycheck. There also are wish-list items for sale like Apple Watches and laptops.

“It’s very expensive to have poor credit,” says DiMarco. “That’s why we’re so busy during the holidays.”

A challenge for DiMarco is making sure he has a team that can manage the pressure of increased workloads and changing job responsibilities, both of which are regularities at startups—and especially at successful ones. 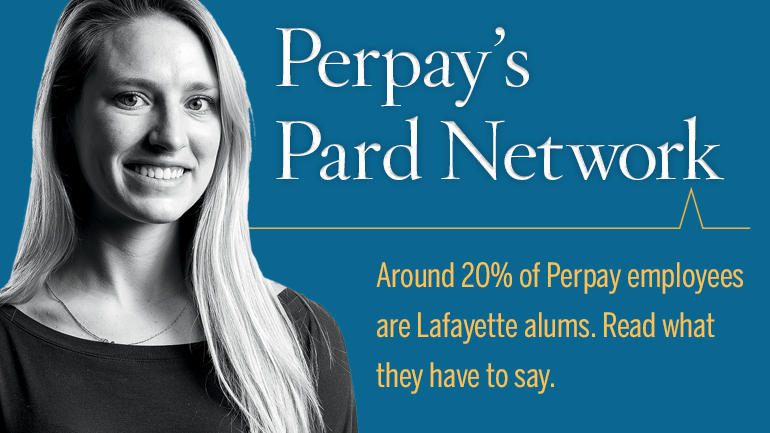 In fact, the “work hard, play hard” culture is essential. When you’re excited to go to work every day, explains DiMarco, people perform better. It’s routine for this crew to schedule pickup basketball before work and drinks together after work.

But an environment of smart and ambitious college grads comes with a caveat too: High-performing talent doesn’t necessarily equate to experience, and this can be challenging for an extremely fast-growing company.

“You’re shifting roles every quarter or every month,” says DiMarco. “The hardest thing is that not everyone can scale at the rate the company is scaling.”

Personnel is just one of the areas that DiMarco thinks about critically. He’s steadfast about how the office is laid out and even shares a desk station with other team members. (If need be, he’ll walk around and take calls with his AirPods.)

He also heavily weighs what benefits packages are offered to employees and how Perpay milestones are celebrated.

“A lot of companies don’t think about how all of these things work in conjunction,” says DiMarco. “It’s not just about the product. It’s about the whole company.”

“I wasn’t always confident, and I wasn’t always entrepreneurial,” says DiMarco, who started his career at a trading firm on Wall Street. “All of my experiences built on each other and crescendoed into this opportunity that Perpay became.”

His combination of nimbleness and tenacity is not unlike that of his mentor and late grandfather, a war veteran without a college degree who went on to build thousands of apartments in the Philadelphia area.

“It wasn’t refined,” says DiMarco, “but he figured out what worked and did it on repeat throughout his entire career. That work ethic is something I always wanted to be around as a kid.”

In addition to various investors and shareholders, around 20% of Perpay employees are Lafayette alums. Most of them, so far, have landed there organically.

King sought out DiMarco after he spoke to a class about entrepreneurship. Others arrived through internships or a friend’s referral. Amanda Case ’17 is lead of its operations team, and Sam Poritzky ’17, who previously worked in retail banking, was attracted to Perpay’s mission. Dana Melby ’19 and Taha Rohan ’19 had a Perpay internship and externship, respectively, before accepting full-time offers.

In addition, Jon Ellis ’98 and Seth Marlatt ’98 (who also serves on Lamps.com’s board) are early investors. Ralph Schipani ’99 and Harry S. Cherken Jr. ’71 serve on Perpay’s board. DiMarco credits Cherken, whom he considers both an adviser and close friend, with inspiring him to get more involved at their alma mater. (Cherken, a partner at the law firm of Drinker Biddle & Reath LLP in Philadelphia, also serves on the Lafayette Board of Trustees.)

Since last spring, DiMarco has served on the board of directors of Lafayette’s Dyer Center for Innovation and Entrepreneurship. Through courses, co-curricular programming, and experiential learning opportunities, the center is working to help students ignite exemplary careers through innovation, creativity, and intelligent risk-taking. Director Yusuf Dahl says it’s been invaluable to have DiMarco’s experience and expertise.

Mike Summers, assistant vice president and director of Lafayette’s Gateway Career Center, adds that Perpay’s presence on campus (alums working at Perpay drive up from Philly to attend career fairs) is a huge asset and opportunity for students.

“In a world with the advent of technology and online job board systems,” says Summers, “the connectedness to our alumni becomes even more important than it did years ago in terms of securing internship and full-time job opportunities.”

THE PATH TO PRIME

Perpay isn’t just about getting someone a new washing machine. It’s a business with a greater mission of trying to improve the financial health of customers. To do that, it recently started reporting the performance of customers back to credit agencies like Experian.

There’s a bit of proof already in that concept: Although the average credit score of a Perpay customer is in the 500s, consumer behavior with these purchases mimics being in the 700s.

His ultimate goal? Improve someone’s score so much that they “graduate” from the subprime range to prime credit.

Cherken adds that DiMarco has identified a business opportunity that’s been overlooked.

“Chris is extremely creative,” he says. “He’s always looking for ways to challenge the customary way of dealing with a problem.”

Perhaps his keen ability to analyze and offer big-picture solutions can be partially credited to DiMarco’s dyslexia, which he calls his “superpower.” Research suggests a link between entrepreneurs and dyslexia. Take Walt Disney, Henry Ford, Charles Schwab, and Richard Branson, for example, who are celebrated for their innovative, creative thinking and problem-solving. “I think about things a little differently,” says DiMarco.

The big focus of 2020 is growth: In addition to moving across town and expanding his team, DiMarco wants to add more categories to the marketplace. And, if he can keep improving the product, perhaps the pricing can improve as well.

DiMarco’s even exploring the idea of a Perpay credit product that’s backed by a bank so the customer has another shot at getting back in the good graces of traditional credit products.

“Our mission isn’t necessarily to be selling sofas, or refrigerators, or iPads,” says DiMarco. “It’s really to be a credit-improving product.”